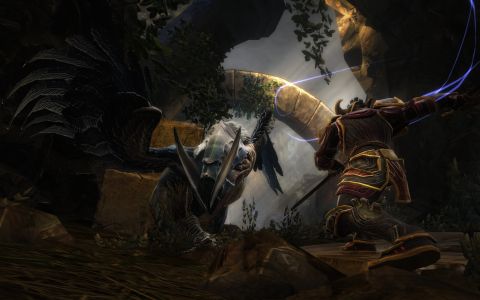 Check back at 1:00pm PT for a gameplay livestream of Kingdoms of Amalur with the reviewers for GamesRadar and PlayStation the Official Magazine.

When kings will be born, how they’ll die, who they’ll right and who they’ll wrong, whether or not the chef’s pastries will be burnt or come out sufficiently flaky – it’s all predetermined in the world of Amalur, a land where fate is cold, hard fact. Everyone’s fate is written in stone, and they’re destined to follow it to a T. Except you. As the “Fateless One” (a name only rivaled by “The Dragonborn” of Skyrim when it comes to coolness), you have the power to reshape Amalur and fight an evil that threatens to destroy the world.

Shocking, right? An RPG where the fate of the world rests in your hands. Luckily, Kingdoms of Amalur: Reckoning is more than an RPG cliché, and proves that there’s plenty of room in the action RPG genre outside of Tamriel and Albion.

It's the fate of the world

Above: You start off the game extremely dead

Yes. The world is at stake. There’s a war going on between the mortals of Amalur and the immortal Fae, which, as you can expect, isn’t going well for the mortals.

After being killed in battle you’re resurrected by a mysterious contraption called the Well of Souls, which is destroyed almost immediately after your revival. Your memory is erased. The gnome that resurrected you has disappeared. You have no idea what is going on. Even stranger, Fateweavers – gifted individuals who can read the threads of fate and accurately predict your future – can’t see a thing. Turns out that since your pre-destined book of destined fate or whatever was closed upon your death, you’re free from its binds, and you’re the first person in Amalur who is truly free to do… anything, really.

Which is great, because the Fae are on track to wreck up everything. Even though they’re usually peaceful and benevolent, they’ve recently been riled up by Gadflow, an evil maniac with motives that expand well beyond wiping out all mortal life. And there’s more bad news: Gadflow isn’t fated to be slain by any mortals. Lucky for the world, your character doesn’t really care all that much about fate. It’s an awesome premise, and one that plays into the story very well.

Around the world in 40 hours

We finished the main campaign in just over 40 hours of play. That, alone, is an impressively long game, but we’re going to be completely honest: we skipped a lot of side quests, and didn't complete all of the different Faction's quests. Those 40-plus hours were spent doing a smattering of missions in each town on our way through the core storyline, and we passed dozens and dozens of yellow exclamation points (denoting new quests) in each area. And there were a lot of areas.

Every town we visited was filled with NPCs eager to toss some coin our way to clear out a cave, take down some trolls, or to find their lost item. After a while, we had to just ignore them so that we’d actually have a chance to finish the game in time for review. If we did them all – or even attempted to do them all – we could see the game lasting two to three times as long. Easily.

There was another reason we started avoiding side quests after completing the first few, though: they weren’t always interesting. Some were narrative-driven adventures that expanded the lore of Amalur, teaching us more about the world while we hunted down treasure or fought beasts. Others were by-the-books MMORPG quests, which got old fairly fast. Kill 10 rats for no reason? Go interact with this rock pile? Nah. We’re good. Thankfully, the game’s strong combat and rewarding loot system make it so even the most mundane quests were still enjoyable, even if they just never felt all that necessary.

Above: Everyone here has a job for you

As we became more involved in the different Faction quests, our overall mission became somewhat muddled. We’d go off the map for a few hours, killing rats and finding rings for random townspeople, and by the time we’d get back on track, we’d already forgotten about Badfwhatever and the war that’s supposedly going on. The world simply doesn’t look or feel as war-torn as it should, and many of the side-missions and Faction quests don’t really involve the world being enveloped in an all-out war.