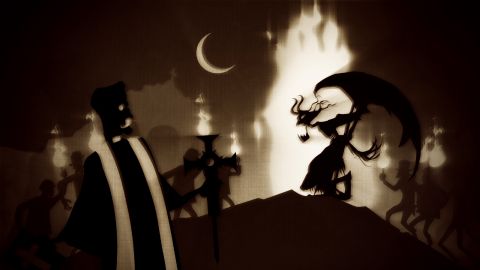 In either case, the mission-creation tools take some patience and experimentation to learn properly, and the playable results vary wildly in quality (although you can still set filters to control what pops up in your game world). However, those who enjoy putting together UGC missions will get a kick out of being able to add static 2D cutscenes (made by positioning characters in the world and moving the camera to create a static shot, then adding floating text bubbles), something that’s also being added to InFamous 2 via a free patch.

Finally, FoB adds Move support (which InFamous 2 will also get from the aforementioned patch), although waggle-phobic gamers will be relieved to find out that it’s only as an aiming device; at no point will you have to shake the Move wand to swing Cole’s cross, or anything like that. As is usually the case, Move enables more accurate aiming for those who have the patience to get used to it, but while it makes flying around in Shadow Swarm a little easier, it doesn’t add a great deal to the gameplay. It also doesn’t detract from it, though, so it’s a great addition for anyone who prefers Move to a gamepad.

As short as it is, InFamous: Festival of Blood is enormously fun while it lasts. The Shadow Swarm power is a ridiculously enjoyable addition, the Halloween plot is interesting (and spiked with a visually arresting shadow-puppet cutscene) and the new UGC features make it a must-have for mission-builders. Sure, it could be more substantial, but considering that your $10 buys a self-contained, open-world adventure with unlimited time to mess around and bite people, it’s definitely worth the download.