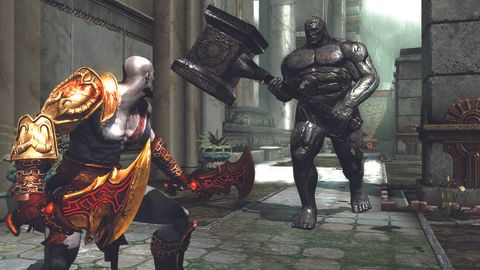 The new weapons all handle differently, sure, but they also do a good job replicating the unique sense of fun that comes from making Kratos whip blades through the air in fiery arcs – something that was sorely lacking in previous games’ secondary weapons. Each one also has a unique purpose that makes them indispensible for combat and puzzle-solving; the Cestus, basically a pair of oversized gauntlets, is super-strong, and is the only weapon that can crack obsidian objects, which naturally you’ll run into a lot.

Meanwhile, the Nemesis Whip – which can be flailed around by holding the button down on each strike, racking up ridiculous combo counts – is key to restoring power to the broken Olympian machinery. And while the Claws of Hades don’t really come in useful for solving puzzles, they can rip skull-shaped souls out of enemies, which then whirl around like deadly purple fireballs.

Making each weapon more vital is the overhaul to the game’s magic system; instead of simply switching between spells, each weapon nowhas a spell attached to it, which grows in power as the weapon levels up. Your magic meter is also kept separate from the new item meter, which refills automatically and enables you to wield things like Apollo’s bow (which can be charged to shoot flaming arrows) and Helios’s lantern-like head (once you’ve freed it from his body, of course).

Additionally, Kratos gets to keep his Golden Fleece – which can parry and reflect attacks – and the Icarus Wings, which enable him to glide over gaps and up shafts of hot air. And if you miss wielding the massive Blade of Olympus, you can still do so by activating the Rage of Sparta,which turns you invincible for a little while and applies a cool visual filter to the screen.

As always, Kratos can wreak considerable havoc with just his bare hands, and his new grab moves – especially the one that has him charging around holding a foe like a battering ram – become essential for clearing out the large crowds of enemies you’ll frequently face.

All these new additions are a considerable improvement to God of War III’s combat, taking something that was already fun and ironing out anything that felt sucky or unnecessary. However, there’s still one part of the combat we haven’t addressed. The most divisive part. The part that a lot of youreally hate right now.

Quick time events (QTEs) are the pre-scripted, mash-buttons-on-cue moments that have been an integral part of God of War since the series’ debut. Since then, however, the industry has overused them to the point where they’re just seen as lazy and stupid. The developers of God of War III obviously understand that, but rather than just eliminate them altogether, they’ve found ways to make them less obtrusive, starting by moving the button prompts to the edges of the screen.

At first, this might seem even more irritating. But because the buttons consistently show up in the same directions they appear on the controller – i.e. Triangle at the top, Circle at the right – and because they’re accompanied by a bright flash at that end of the screen, it quickly becomes easy to respond to them as they pop up in your peripheral vision, enabling you to focus on the action instead.

And you’ll want to focus on the action, because these moments are almost always rewards for beating down a particularly tough enemy; your participation may be minimal, but we’ll be damned if the results aren’t always fascinating to watch. Especially if it’s a god or hero you’re smacking down – the game’s most notable deaths are also its most horrific, and range from the Helios head-rip with which we’re all familiar, to a gruesome re-creation of the fire-extinguisher scene fromIrreversible.

Above: This is actually comparatively tame

Aside from killing things, QTEs are also key to riding some of the larger monsters, like the occasional Cyclops or the smaller, fire-breathing siblings of three-headed demon dog Cerberus. They also occasionally come up in puzzles – most notably a bizarre rhythm minigame in which you have to tune and play a massive instrument – and, of course, they’re an integral part of Kratos’s romantic encounters.