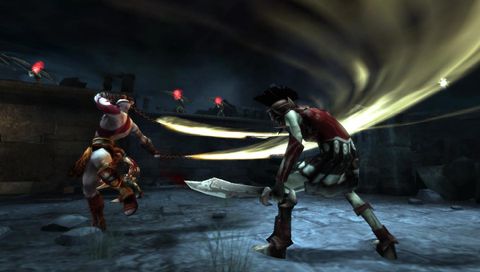 When God of War III ended, Kratos’s story was finished – at least for the time being, what with Olympus in ruins and his revenge finally complete. But the ending still left a big plot thread hanging, one that began in the hidden recesses of the first game and was never pursued: Kratos had a brother. One who’d been snatched away as a child and raised in the underworld. One who, Kratos learns early on in Ghost of Sparta, is still alive.

And with that, we’re plunged headlong into another vicious, rage-fueled stomp through the more monstrous side of Greek mythology, as Kratos travels to Atlantis, Sparta and, finally, to death’s domain (which is separate from Hades, making this the first GoW to not include a trip to Greek hell) in search of his lost brother Deimos. Along the way, we’re treated to flashbacks to Kratos’s childhood that reveal the origins of the bald Spartan’s tattoos and the ragged scar over his right eye, and we’ll ultimately learn why he’s so goddamn furious with the gods at the outset of God of War II.

That setup forms the backdrop for one of the most impressively slick God of War games yet. Ghost of Sparta is unquestionably one of the best-looking, if not the best-looking game on the PSP, and veteran developer Ready at Dawn seems to have used every trick it knows to make the game vivid, smooth and richly detailed. The action is largely unchanged, still balancing occasional platforming and environmental puzzle-solving with gracefully brutal, button-mashy whip-sword hack-and-slash, although Ghost also borrows a few gameplay ideas from God of War III, while introducing a few original touches of its own.

So it’s difficult to say, then, exactly why Ghost of Sparta feels strangely disappointing. It’s not that it’s bad, or even mediocre – this is still every inch a full-blooded God of War game, and it’s still expertly produced, brutal fun. But something about Ghost of Sparta gives the impression that it’s just going through the motions and ticking off boxes of the familiar God of War formula. Expecting an opening sequence built around a lengthy fight with a giant monster? Meet Scylla, a massive sea-beast who repeatedly menaces Kratos throughout the first chapter. Enjoy pulling off Kratos’s balletic, button-mashy combos? They look exactly the way you remember them. Want to make Kratos get his freak on offscreen? A Spartan brothel gives the series its first implied nine-way.

All the familiar elements are in place, which means we know what we’re getting – but that also means we’ve seen a lot of this stuff (or, at least, things similar to this stuff) before. And the difference is that this time, those elements don’t always feel meaningful to the plot so much as they just feel obligatory. It also doesn’t help that, unlike the other God of War games, Ghost of Sparta suffers from occasional pacing problems, with a few annoyingly awkward balance-beam segments and too-long battles with repetitive enemies breaking up the game’s otherwise brisk tempo.

It’s important to stress that Ghost of Sparta is a great game – it just falls short of its stellar predecessors. It’s also not without uniquely memorable moments; at one point, Kratos takes a casual stroll through Sparta, marking the first time ordinary citizens have cheered and saluted at the sight of him, instead of just running away. At another, he has a lengthy encounter with King Midas that culminates with him beating and dragging the poor, cursed old man to a horrible death just to open the way forward.