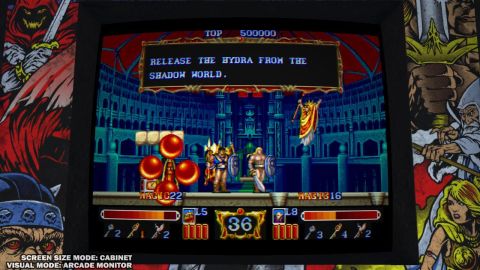 The gang’s back together again. Martials arts master (and suave ladies man) Cody, Ninjutsu-utilizing Guy, and ex-pro wrestler turned mayor Mike Haggar have all been called back into action againto save Metro City from the Mad Gear gang and rescue Haggar’s daughter, Jessica, from the likes of the wheelchair-bound (yet still surprisingly nimble) Belger. All the classic side-scrolling beat ‘em-up goodness you remember is here in Final Fight: Double Impact, and it’s in gloriously crisp high definition.

It’s also fully online, so beat ‘em up aficionados across the country can team up to punch their way through all six areas of Metro City, taking out Poison, Roxy, Damnd, Sodom, and other punks that continually roam the murderous streets. In the style of 80s arcades, players can jump into games to fight side-by-side with an old friend or a random “guy who just walked up to the machine” partner in either Final Fight or the lesser-known (but still as entertaining) Magic Sword.

As a quick history lesson for thosenot familiar with either title, both games were created in the popular side-scrolling, beat ‘em-up fashion that was continuously popular at arcades up until the very late 90s. But the decline of arcade parlors and the advent of 3D graphics virtually destroyed the profitability of these machines. Still, many gamers that grew up during this era dumped dozens of quarters into games like Final Fight, Magic Sword, The Simpsons: The Arcade Game, and Knights of the Round.

Almost every generation of console gaming has seen its ported version of Final Fight, but few have included as many enhancements, upgrades, and whimsical features as Double Impact, which takes this game from a simple conversion to a solid stand-alone game. Four features really help to make this bundle stand out from other arcade conversions: in addition to those lush HD graphics and online co-op with a buddy or a random stranger, you’ve got Achievements and Trophies that are unlockable via defeating in-game challenges, plus an online leaderboard that’s broken down by difficulty (which you can adjust via in the “Custom Match” option).

All of these modes are facilitated by the fact that not only can you play through the game from start to finish with unlimited continues (with a second player able to join at any time), you can also select the stage you wish to start on and the level of difficulty of the enemies. These modes are available for both Magic Sword and Final Fight, so if you’re not feeling up to defeating a roided out Roxy, you can tone the difficulty down and tear through a whole medieval kingdom. Players can also search out custom games via the Final Fight online co-op matching system, so you can jump into a Medium or Hard brawl while still knowing exactly what stage your partner is on.

Leaderboards give the titles the competitive flair of the arcades, but the best enhancement to the game lies squarely in its unlockable challenges. Like almost every modern game, achievements are unlockable in Final Fight and Magic Sword depending on the time it takes you to finish a level, the number of times you die, and a whole flurry of other challenges. These challenges will be hinted at while you’re exploring particular levels, acting like a double-dog-dare to the competitive spirits in us all.

The $9.99 price point is almost too good to pass up. The only thing that could make this package better would have been the addition of new unlockable characters. We were hoping to see some cameos in each game, Final Fight in particular. Barring that, even some additional skins for Haggar, Guy, and Cody would have been perfectly acceptable. Sure, they would probably have to have been turned off in the online, competitive modes (to preserve game balance), but having them available in solo play would have been a nice bit of fan service.

If you’re the kind of gamer who loves a quick and competitive romp through gaming of yesteryear, absolutely give Final Fight: Double Impact your consideration. Mike Haggar is one mayor who definitely deserves your vote.