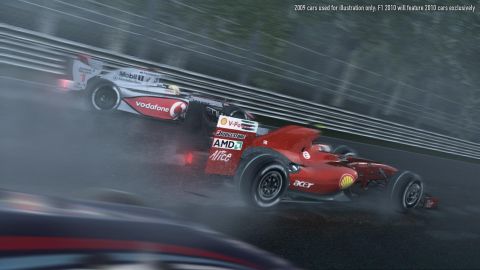 Let's ignoreall the bells and whistles for a minuteand look at the most important part – the driving itself. If that's not up to scratch then everything else is meaningless. On Easy setting, auto-brake and driving line assists allow you to keep the throttle floored and just enjoy steering the car around these magnificent courses. It's fast, it's smooth, it's fun. Medium gives you back the brakes but keeps auto-gears, which makes the game feel like a classic arcade racer. All good so far.

Above: Flying into first place at Kuala Lumpur. Beautiful circuit, but I haven't seen any koalas. YET

Once you get up to Hard, you'll have to manually change gear and learn the tracks in order to prevail. Getting on the throttle too hard or too early out of a corner will result in a spin, but most moments can be caught if you've got the reflexes to cope with it. It's amazing how you find your own rhythm over longer sessions – and how catastrophic the results can be if you lose your concentration.

Above: It only takes a split second of daydreaming to turn your race weekend into pretty crash physics

Finally, Expert mode is extremely punishing. With no traction control, a novice will spin on the exit of every corner because you really have to behave as though the throttle were made of eggshells. But, once you start learning how to tame the 1,000 horsepower under your big toe, nailing clean laps is incredibly rewarding.

Where the game really shines, however, is in the racing itself. I honestly can't remember the last racing game that really gave me such a thrill from racing in an offline mode. Rounding the last corner of Melbourne to start the final lap of a 12-lap race and realising you might just be able to catch Hamilton to take the win is ridiculously exciting.

Online is even better, with something for everyone to enjoy. Quick Race is a chaotic, frantic three-lap sprint for casuals to enjoy, while the more serious racers will find loads of hardcore racing, strategy tweaking and pole-snatching in the Custom Grand Prix mode.

Above: Side by side into one of the scariest corners in the world... bravery, or stupidity?

The length of the races and preparation that goes into them makes it feel like it means more than other racing games. When you've gone through three practise sessions (reaching target times for team testing), then competed in three qualifying sessions, the race itself feels like a big event. So in the situation above, you don't feel the desire to make a rash, videogamey decision. You want to do it properly – and that's something that F1 2010 gives you better than any other current-gen racer.

Thanks to the Ego engine's ability to rewind the action and resume from a point in the near past, those rare occasions when you do feel cheated – by being punted off the track by someone else or losing your wing on a double-braking opponent's rear wheel – can now be discreetly erased. You get fewer chances to do this the harder you set the difficulty, but even one rewind is enough to alleviate massive frustration.

Above: It's all gone just a tiny bit wrong. But that icon on the right means you have one more rewind left. Yay!

While the AI can often make mistakes that end up in race-destroying collisions, the quality of its defensive driving is superb. As it sacrifices its own speed to take inside lines into corners and block your moves, suddenly you realise the cars ahead of you both have pulled away, and someone else is now snapping at your heels. Again, this is something loads of games claim to do, but simply don't deliver.

So, with a big check against 'is racing awesome?' we should examine all that peripheral 'live the life' craziness. Codemasters has made a determined effort to recreate the feeling of actually being an F1 driver, and the finished result is pretty close to those early concept shots. Not all of it works, mind. The agent woman in your trailer is hella creepy, especially when she calls you by your own name.

Above: Zombies aren't that well known for their love of F1 contract negotiations, but you can't argue with this

The press conferences are a nice touch, with multiple choice answers to questions that will help shape your career and contract options. It's also very refreshing to have a proper rivalry with your team-mate. Beating the supposed 'number one' in the team in qualifying and race positions really puts the cat amongst the proverbial pigeons.

There are a few missed opportunities. The lack of a champagne-spraying sequence when you win is a surprising omission, especially as I expected it not only to be there, butto be interactive, given the rest of the immersive features the game has. Maybe the reason for this is that you never talk to any of the other drivers in the paddock. Despite the full license for driver names, they're only ever glimpsed from afar, which makes this quite a one-man show.

Also, physically walking around the pits and getting into the car would have helped make the transition from menu to game even more seamless. Maybe next year?