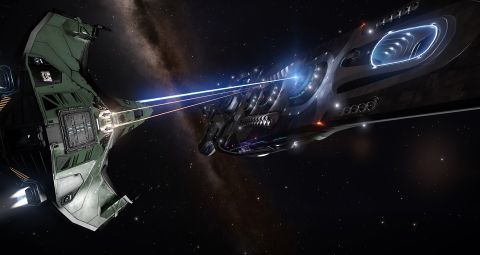 A colossal space sim that offers an invigorating amount of freedom. It’s just a shame the multiplayer aspect is so half-baked at the moment.

There are 400 billion star systems in Elite: Dangerous’s 1:1 recreation of the Milky Way. That’s as many as scientists think are in the one we’re spinning through now. It’s a dizzying, overwhelming number, but makes for a compelling space sandbox. If you see a star glinting in the sky, you can visit it. It might take you all day, but you can.

But only a small corner of this galaxy, set a thousand years in the future, is actually inhabited by humans. This is a future where we’ve mastered faster-than-light travel, but have only taken the cosmic equivalent of a few steps down the road. Billions of those systems out there in the depths of space have never been seen by human eyes, and you could be the first, like the pioneers of old. You can then scan these frontier worlds and return to populated space, selling the data for profit.

It’s not all about money, though. There’s some stunning scenery out there in the far reaches, and you’ll regularly find yourself stopping your ship just to gaze at stuff in wonder. On my travels I saw burning purple suns, colossal asteroid belts, tranquil Earth-like planets, and dying stars. You really do get the feeling that you’re exploring a vast, uncharted galaxy, and you’ll be hitting that screenshot button a lot.

But, this being an Elite game, that’s just one of many paths. If exploration isn’t your thing, there are dozens of other ways to seek fame and fortune. It’s a sandbox in the truest sense, and you have to make your own fun. When you start the game you wake up in a basic Sidewinder ship, on some backwater Federation outpost, with 1,000 credits to your name. What you do next is left entirely to your imagination.

Since this is a realistic recreation of our own galaxy, it’s possible to visit Sol, our home system. You can visit Earth, Jupiter, and all the other planets. Even Pluto. Which isn’t a planet, but still. But because this is the year 3000, there are some differences. Mars is no longer red and barren, but blue and Earth-like, due to terraforming. The catch is, you need a permit to fly to Sol as it’s the Federation’s capital system. You’ll have to curry favour with them by doing missions to earn the privilege.

If it’s excitement you want, use your Sidewinder’s pulse lasers to hunt pirates and collect bounties. Dogfighting in Elite is a thrill, like being in a Star Wars battle. While it has the same ‘jousting in space’ feel as other sims, there’s a rich sense of physicality to the combat. When you fire your miniguns, you hear the rattle of the bullets as they shred your opponent’s hull. Sparks spit from your cockpit as you take damage, and the slight delay before a defeated foe explodes is hugely satisfying.

Your starting ship can only be fitted with a couple of puny lasers, but upgrade to a larger vessel and you can cover it in heat-seeking missile launchers, searing laser beams, and rapid-fire miniguns. This is when you can start hunting bigger game, like fearsome pirate lords, which will earn you large bounties. But getting there will take some time, as the really cool ships cost millions of credits. Not to mention the upkeep: repairs, insurance, munitions, fuel. Above all, it’s money that keeps Elite’s galaxy spinning.

So it’s a good thing there are plenty of ways to make it, many of which don’t involve firing a single shot. Trading is a huge part of the game, and buying and selling goods between stations is an easy, but slow, way to generate income. You can buy special hauler ships that trade combat prowess for big, fat cargo holds. You can either take on courier jobs, like a galactic UPS, or play the market yourself, taking advantage of supply and demand in different systems to buy low, sell high, and earn big.

Choose this career and you’ll spend a lot of time in transit, where the only interactivity is adjusting your acceleration so you don’t overshoot your destination. It’s like driving down a straight space freeway. There should be something more meaningful to do during these long, uneventful journeys. The distances between stars and planets are realistic, sure, but this doesn’t exactly translate into a fun experience.

Then, when you get there, you have to slowly approach the station, request docking access, lower your landing gear, guide yourself through the narrow, spinning entrance slot, and hit the landing pad - all in real-time. This is a glacial, slow-paced game that you’ll need to sink a good few hours into every evening to get the most out of.

It can feel like a grind sometimes, especially at the beginning when you’re doing short-range deliveries for 2k a pop, but upgrade your ship and things get increasingly more varied and exciting. In a better ship you’re able to take on more dangerous combat missions and carry more goods to trade. It’s a slow road, but when you finally swap your Sidewinder for something better, the game gets steadily more enjoyable.

The quality of the flight simulation holds everything together. The ships are all an absolute pleasure to fly, whether it’s a nippy fighter or a bulky space-truck. There’s a pleasant weight and responsiveness to the flight model, complemented by some really amazing sound design. When you spin your engines up you hear them roar to life, and you feel yourself leaning back into your chair when you hit your afterburners. Every ship has its own distinctive look, feel, and sound. Only 15 playable ships are available now, but Frontier are shooting for a total of 30 in the coming months.

See, even though Elite: Dangerous is ‘out’, it’s not really finished. Like an MMO, its development will be long-term, with new content, features, and upgrades added on a regular basis. As a result, the game in its current state is missing a lot of important features, especially when it comes to multiplayer.

You can’t transfer money to other people (for example, to split mission rewards), and there’s no way to share waypoints or form groups. The game uses instances rather than EVE-style open servers, so it can be difficult to stay together. You’ll both jump into a system, only to find you’ve been separated, even though you’re in the same area. There’s a lot of room for improvement, but if the frantic updates of the beta testing phase are anything to go by, Frontier will, hopefully, be fixing and adding things thick and fast.

A lack of personality is also a problem. Mission text is auto-generated and feels a bit robotic and impersonal as a result, and the galaxy is so colossal that you can go hours without seeing another person. The world doesn’t feel as alive as it should, although the community is taking this into their own hands, choosing specific systems as unofficial gathering points. Keep a close eye on the Frontier forums and the Elite subreddit, because player-driven events are where the best stories will likely emerge. Frontier say they encourage players to try and break the game, like crashing or boosting economies, and they’ll respond with unique, related world events.

But even now, taking its first, tentative baby steps, Elite: Dangerous is a hell of a game. It’s a welcome return of the old school PC space sim, but with a modern edge. The ship handling, especially with a flight stick, is a constant delight, and the size and scope of the Milky Way is intoxicating. I love the feeling of picking a distant star, firing up my engines, and just flying there. When Frontier knocks the online elements into shape, and adds a greater variety of things to do, this could be something very special indeed.

A colossal space sim that offers an invigorating amount of freedom. It’s just a shame the multiplayer aspect is so half-baked at the moment.