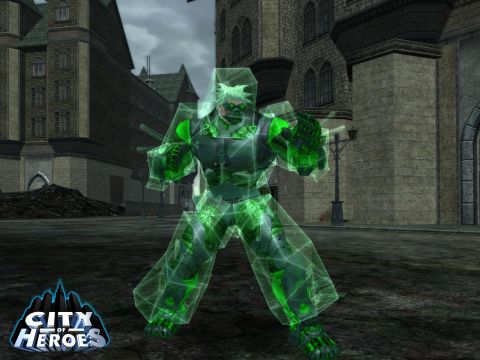 Quick - name a game with an elf in it. If you’re an online RPG fan, it’s not hard. Yet for all the success of fantasy-themed games like World of Warcraft, EverQuest II and Dark Age of Camelot, there’s precious little out there for people who didn’t grow up with a Lord of the Rings fetish. That’s where City of Heroes steps in to save the day for any gamer who’s spent more time with Teen Titans than Tolkien.

Instead of donning gauntlets and slaying dragons, City of Heroes lets you slip into spandex tights for truth and justice. Choose your powers - energy blasts, flaming punches, mind control, and many more - and design your costume with a deep and enjoyably-fiddly creation tool. You’ll soon be dropped onto the ravaged streets of Paragon City, where a recent alien attack has left the city devastated and ripe for crime. It’s up to you to smite evil, teaming up with other heroes to form temporary teams and more stable supergroups as you see fit.

While City of Heroes hides a rich mythology in its metropolis - pay attention to the subtle story aspects and you’ll learn 50 years of heroic history - it never gets in the way of the action. CoH is heavy on the punk-bustin’ and light on boring elements like item crafting. Itching for a smackdown? Fly over to Perez Park and thump the loitering ne’er-do-wells. Need a challenge? Join up with friends for a day-long Task Force, or test your might in a deadly gladiator arena. As you bring zombie hordes, sentient scrapheap robots, and even player-controlled villains to justice, you’ll earn upgrades for your chosen powers, as well as all-new crime-fighting abilities.