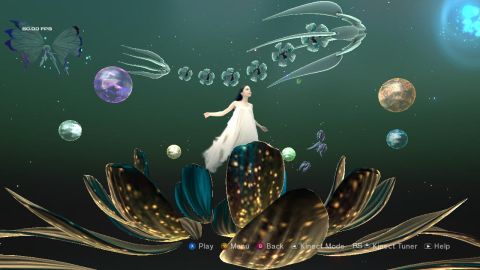 Defining Child of Eden, the spiritual successor of GamesRadar favorite Rez by the same creator, is challenging. Sure, calling it a single-player on-rails music-based shooter is sufficient, but that hardly conveys the actual experience behind the game. And that’s what Child of Eden is, really, an experience. This Kinect-supported title pulls you into a world filled with fantastical visions coupled with atmospheric yet upbeat music for an entirely new, yet familiar, game. And, while you can still play without a Kinect, the experience is lessened through the use of a controller.

Above: Meet Lumi, her face is going to pop up during boss battles and you’ll soon forget why you’re saving her

Child of Eden’s storyline will be somewhat familiar to those of us who played Rez. In fact, the two games’ worlds are interconnected. In Child, your main task is to save Project Lumi that exists within Eden, a future version of the internet/artificial intelligence containing all the memories and experiences of Earth, the same Eden in which Rez takes place. Project Lumi’s ultimate goal is to resurrect the persona of a woman named Lumi inside Eden including all her memories and experiences while on Earth, however it is currently under attack by a host of viruses and it is your job to purify (the game stresses that you’re not destroying, but purifying) them in order to save Lumi. Perfectly clear, right? Well, it’s safe to say that the story won’t factor into your enjoyment of the game as Child is eye candy in the truest sense of the word.

Gameplay is decidedly straightforward using the Kinect or the controller, and will be instantly familiar to those of us who played Rez. It’s in controlling the game that the integration between Child and Kinect really shines. Playing with the controller requires that you constantly hold down the A button to lock the reticle onto up to eight targets only releasing to fire. However, with Kinect, simply waving your hand over groups of enemies locks on and a quick forward movement of your hand fires at your target. The gestures are picked up very well via sensor and the forward movement feels like a natural extension for firing.

Above: You’ll know when to use your rapid fire shot because of the purple hue of the projectiles

New to Child is a rapid fire shot used specifically against purple-colored enemy projectiles. Kinect users have two options for this shot; Type A maps your right hand to the standard one and your left hand to rapid fire while Type B requires clapping your hands to switch between shots. Via controller, rapid fire can be used either with the RT or X buttons.

Support Items like health and Euphoria, a screen-clearing explosion that wipes out your enemies, are presented as spheres that you must lock on and fire upon to collect. We took perhaps too much delight in triggering Euphoria via Kinect which entails throwing both hands in the air. That coupled with a myriad of tiny explosions on screen is rather satisfying.

There are five levels, or Archives, each with its own visual theme. Earning stars based on your score per Archive helps unlock later levels and, while it can be fairly easy to clear a level on the first play though, you’ll find that it may be necessary to replay them in order to gain more stars to progress. However, because of the nature of the visuals and music in Child, replaying an Archive never feels like a chore, rather you’ll find yourself noticing new details.

Above: There will be several times where you’ll wish you could stop and smell the pixels

Visually, Child is a gorgeous game. Bright, vibrant colors and whimsical enemies ranging from screen-filling whale-like creatures to flower buds that bloom to produce new targets often make you sometimes wish you could stop firing at viruses just so you can watch and take in everything going on. As mentioned previously, each Archive has its own theme visually and musically. Matrix, the Archive you’ll first play through, is the most Rez-like of the bunch, with a more angular style and enemies that aren’t necessarily referencing anything in real life you’ve seen before. Evolution, which follows Matrix, is a complete deep sea adventure with swirling seaweed-like backdrops and viruses that look like neon cousins of their ocean counterparts.

Child bills itself as a music game and with an original score by the creator’s group, the Genki Rockets, it does not disappoint. The soundtrack is atmospheric, quirky with a definite electronic feel. This game may be the closest your console will get to being the Trance room in a warehouse rave. Trust us when we say this is a cool thing. But, don’t suppose that the soundtrack simply turns to background filler while you purify Eden, for higher scores are achieved by timing your firing with the rhythm of the music. Locking on to eight targets and releasing your shot on beat causes a multiplier which can be essential to unlocking further Archives.

Above: Old school gamers may appreciate the option to turn the entire game into an 8-bit rendition of itself, but we just found it too distracting

Unlockables in the game vary from items that can be placed in Lumi’s Garden, which is the main menu of the game, to screen shots, to movies ranging from the opening sequence of Lumi looking like she stepped straight out of an 1980s feminine hygiene commercial (complete with flower-filled field and diffused lighting) to an animated music video of her singing the theme song. Other extras allow you to modify everything from the audio of the lock-on sound (Beatbox Variation), add your own sound effects during play and even change the visuals themselves.

While the game seems short at first glance, gameplay between the Kinect and controller are considered two separate entities, so while you may finish the game with the controller you are required to play through the whole game again if you decide to try it with the Kinect. Since the two experiences are fundamentally different it almost feels like two games in one. Multiple difficulty levels, including “Feel Eden” or God mode, plus a 30-minute Hope challenge mode that unlocks after you clear each Archive on Normal flesh the game out, but you may be left wanting more after saving Eden. We found that the length was perfect for the amount of visual and sonic overload that could sometimes occur during extended play. The warning at the beginning of the game about the potential for seizures isn’t one that should be taken lightly as there were a few instances where we had to turn away to rest our eyes.

Above: Then there will be instances where the whole screen turns into a riot of visual overload. This screen is actually pretty tame

Child of Eden is the first Kinect-supported game that can bridge the gap between those that consider the peripheral strictly for casual gamers vs. hardcore ones. The game is challenging, visually stunning and is truly a unique experience not found anywhere else. While controller play is supported, and sometimes preferred after extended time waving your arms, playing via Kinect feels futuristic in an exciting and refreshing way.

Photoshop is my friend!
See comments