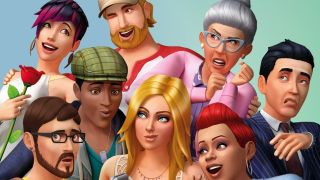 No matter how many new and incredible games are released, most of us have an old faithful that we always go back to. Maybe it's an MMO that feels like home, or a cellphone game that you're addicted to, or a game that keeps changing just enough to keep you coming back for more. This week we asked the team a tough one - if you could only play one game for the rest of your days, what would it be?

This might be one of the trickiest questions I've ever had to answer in my entire life, but due to the fact I've probably sunk more hours into The Sims franchise than any other game series... ever... Maxis' life simulator has to be the one. EA steadily drip feeds you with Stuff packs and expansions that keep drawing you back into your Sims' lives, and seeing as I am more than happy to spend entire weekends building one single house, experimenting with mods and creating dreams homes, I'm sure there's plenty of content in The Sims to keep me going until Death turns up. Hopefully not after an incident with a small room with no doors and a fire. Or a pool with no stairs. Sam Loveridge

This is kind of a weird pick since I don't actually play Final Fantasy 14. The thing is, I've always wanted to. Several of my friends and colleagues swear by it, and I did enjoy the free demo when I tried it two years ago. I love the art and music, the classes look intriguingly flexible, and I'm super into the crafting system. I loved Fantasy Life on the 3DS mainly for its RPG-ified crafting, and Final Fantasy 14's system looks like a much more complex and hardcore version. I could totally get into the virtual artisan life. The thing is, I simply don't have time for an MMO. Destiny 2 eats up enough of my time already, but more importantly, there are tons of games out and coming out that I want to play. I'm the kind of person that likes to beat games and move onto new ones, and that's not really something you do with an MMO. But if all those games are taken out of the equation and I can only play one forever, I'd love to finally get stuck into Final Fantasy 14. Austin Wood

Sure, I technically haven't played Super Mario Maker 2 yet, given that it hasn't launched at the time of this writing. But if it's anything like the first Super Mario Maker, it'll be an infinite wellspring of 2D platforming goodness with the kind of presentation and polish that Nintendo does best. Whether you're in the mood for an intense challenge, a leisurely stroll, a ludicrous slot machine, or an unexpected laugh, the player-created levels of Super Mario Maker collectively have it all. And if, by some miracle, I managed to play every SMM2 level in existence, I could just start the process all over again with the intent of speedrunning and/or no-death clearing the whole shebang. In this hypothetical desert island scenario, I'd hopefully have a fast internet connection and a lifetime Nintendo Switch Online subscription so I could play with folks online, competing for first place or just goofing around in one another's custom levels. Lucas Sullivan

Inquisition is just so massive and varied. Gorgeous and wonderful. Exciting and different. For a single-player, narrative-driven game, it offers an enormous range of ways to play that goes beyond a character choice or two. Its variety is immense and extends to its entire world: so many different typologies and landscapes to explore, containing excellent locations; a rich depth to its land and cultures in the form of lore and history (you could spend ages reading every book you find); and a multitude of peoples with different traits and characteristics. It may not have as many hidden surprises as a Skyrim or the all-round quest excellence of a Witcher 3, but it has so much to keep you gripped and interested. And the story is so wonderfully long and weaving now (thanks to the DLC) that it’s easy to imagine having fun revisiting bits from previous playthroughs or discovering things you never previously noticed. Every time I fancied a change, I was always excited by starting a new character and playthrough; a new way to play the game, and a new way to romance, fight, chat and discover the world. I’d bank on that feeling being maintained until my very end. Rob Dwiar

Every week, a hooded weirdo turns up on a street corner to sell us stuff. Although that’s a bit worrying in retrospect (especially because this digital stranger has tendrils of something oozing from his head), he offers us cool guns at low prices so is probably fine. The strangest thing is our nickname for him, though; a friend once called him ‘Tentacle Face’ in our Whatsapp group, but autocorrect changed it to the infinitely funnier ‘Tentacle Dave’... and that title’s stuck for the past five years. It’s quirky anecdotes like this that make Destiny 2, its predecessor, and every bit of DLC in between so memorable. Better still, there are enough activities crammed onto one disc to keep you busy for all of eternity. When you factor in the wealth of new content being added as the years go by, you’d probably be left with things to do in Destiny 2 until the heat-death of the universe. That’s what makes it the perfect choice here. Benjamin Abbott

As much as the idea of a hundred hours long solo RPG appeals to me, replay value would have to be key for a game of this criteria, and I don't know of any other title - with the exception of perhaps World of Warcraft - with more replay value than Overwatch. Ever evolving, always relevant, and relentlessly entertaining, the Overwatch of today is going to look very different from the Overwatch of tomorrow, and the community around it is just as lively and diverse as the game itself. Sure, I'd be a bit screwed if those rumors about Blizzard announcing Overwatch 2 turn out to be true, stuck playing the original title as everyone else moves on to the sequel, but I'm secretly hoping that it'll actually be a WoW-style expansion to the base game, which would only validate my choice even further, so there.. Oh gosh, they're making Overwatch 2, aren't they? Alex Avard