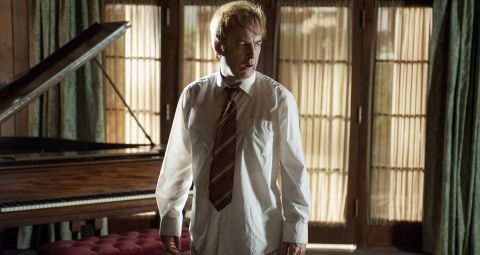 “Wow… you got a mouth on you.” Drug dealer Tuco’s assessment of Jimmy McGill is not only astute but perfectly encapsulates the appeal of this brilliantly scripted episode, and the potential of Better Call Saul as a whole.

Co-showrunner Peter Gould puts it even better, describing McGill as “a character whose secret weapon is his mouth”. The lengthy dialogue between McGill and Tuco as he bargains for the life of the two slackers he roped into his misguided scheme is captivating, a sustained, supple dance of dialogue that’s as gripping as any car chase or shoot out – if not more so. It’s the sort of sequence you want to rewind the moment it’s finished.

And it demonstrates rather neatly that it doesn’t really matter that we’ve seen Jimmy’s future. That’s the inherent problem with a prequel series, of course; we know Jimmy’s not going to die. (Mind you, let’s be honest… we knew Walter White wasn’t going to die too. Not until the end). But when it comes to anyone else, whether it’s the hapless skateboarders, Jimmy’s brother, or the mysterious Kim, anything is possible.

The music that plays over the scene where Jimmy meets a woman in a bar is “Boulevard Of Broken Dreams”, a 1958 track by Mexican band leader Esquivel.

It’s surprisingly heroic – if that’s the right word. Jimmy could walk away. By pausing to argue the toss, he risks bringing down Tuco’s wrath. Luckily for Jimmy, Tuco is, at this stage, not quite the hair-trigger psychopath he will one day become.

Judging by the beautifully put-together montage that follows, the encounter seems to energise Jimmy. It’s a pleasure to see him being good at his job, giving dim-witted juvenile perps a last chance at a life without a serious criminal record. It’s almost a shame it can’t last. As one suspected the moment Tuco hoved into view, Jimmy’s days as a cynical but essentially straight, law-abiding lawyer are coming to an end. With the offer of a partnership from Tuco’s lieutenant Nacho, the journey down the path to becoming Saul Goodman – a criminal lawyer, not a criminal lawyer – has begun...

“It’s from a movie!” Jimmy explains to a bemused guard, as he repeats this catchphrase for the umpteenth time. “It’s showtime!” features in countless movies (Beetlejuice, for one), but the specific reference here is to 1979’s All That Jazz, whose choreographer Joe Gideon likewise says it to a mirror to psych himself up. With this and his episode one homage to Network it’s becoming clear that Jimmy is a big fan of ‘70s cinema!

Breaking Bad fans with long memories will nod knowingly at the sight of Tuco upbraiding henchman No Doze for sticking his oar in. He eventually spoke out of turn once too often (in the Breaking Bad season one finale), and was beaten to death by his boss.

Michael Mando (Tuco’s associate Nacho) will be a familiar face to fans of Orphan Black, in which he appeared as hapless petty criminal Vic Schmidt.

Was anyone else hit by a wave of nostalgia the moment we saw Jimmy tied up out in the desert? Very Breaking Bad. Shot over the course of two days, this sequence was, according to Bob Odenkirk, “Hell to make”. It didn’t have to be that way - the scene was originally pitched as taking place inside a warehouse.

Apparently the courtroom montage features a “blink and you’ll miss it” sight of a character who’ll be very important in episode four. The guy with the facial tattoos? No-belt dude? The fella running down the stairs from the guards? My money’s on Saul’s two-time client “Mr Berger”. Place your bets!

For all this episode’s prodigious verbosity, it’s a quick flash of dry wit that sticks in the memory… Court clerk: “What do you want?” Jimmy: “Not to starve.”