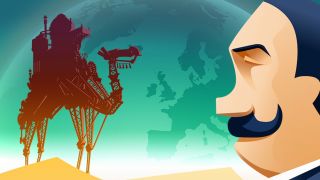 You’re down to the last three players in a Fortnite battle royale, crosshairs locked on your enemy. You hold your breath, tap to shoot and then... you go into a tunnel. Connection lost. Chance of victory gone. Playing online on your phone is fun, but there’s plenty of reasons you might want to know the best offline Android games. Maybe your internet connection isn’t stable, maybe your commute takes you underground - or maybe you just like the feeling of disconnecting for a few moments and slipping into your own private world.

Whatever your reason, you’ve come to the right place. Thankfully, many of the best mobile games don’t require an internet connection and are best played solo, headphones jammed in your ears. From puzzlers to story-driven epics, here are the best offline Android games you can play right now.

Alto’s Odyssey is endless in every sense of the word: if you’re good enough, you can guide Alto and their sandboard over countless hills and ramps, backflipping over gorges and leaping between grinds on temple ruins. But when you eventually fail and face-plant - and trust us, you will - it’s oh so easy to start another run, seeing if, this time, you can just get a little bit further, perhaps even glimpsing the next elusive biome.

While mechanically simple, Odyssey feels majestic, and that’s down to the little touches: the purple sun rising against a cityscape background, or the way Alto’s scarf grows longer as he lands tricks. Best of all, it’s completely free.

Minecraft, as the name of its massive 2017 mobile update suggests, is Better Together: but it’s still a fantastic solo game, too. Going offline means you can’t hang out with friends on your favourite server or collaborate on builds, but it gets you back to the roots of what makes Minecraft magical. It’s just you, a pickaxe, and an infinite world of blocks to whack.

Playing Minecraft alone can be meditative, especially when the wonderful music swells. We could spend hours in stripmines hunting for diamonds without getting bored, because it’s always in pursuit of a higher goal: a house you want to build, a farm you need material for, or an epic journey across the map that requires plenty of supplies. Yes, you don’t get to show off the fruits of your labour if you’re offline - but there’s still a huge satisfaction in formulating a plan and watching it come together, eventually sitting back and admiring your own work.

Oxenfree’s premise - a group of ‘80s teenagers pile onto a creepy island - is a classic mystery trope, but you’ll soon realise this is anything but an ordinary game. The supernatural twists and turns will keep you locked in, but the characters are the real draw. Developer Night School Studio paints the cast’s personality with every word, and their obsession with teen drama makes them feel like real people

Even better than what the characters say is how they say it. Oxenfree’s dialogue system remains one of the best in any game because it lets you choose when to interrupt, when to stay silent, or when to choose from all the available options. You have total control and the other characters always react believably, which is no mean feat.

We’d actively advise against playing this with a friend, or with someone looking over your shoulder. It’s not just Her Story - brilliantly-acted murder suspect Hannah Smith, who spends the whole game being interviewed by police - but it’s your story in that you decide the order of the clips based on the keywords you search for. Hannah is the only character, and you’ll get to know her ticks and habits intimately as you trawl through a police database, looking for clues about her husband’s death.

There’s no one best way to experience Her Story, and every player comes out of it with a different  theory as to what happens. The important thing is to trust your instincts, search for keywords that feel right, and see where it takes you. Don’t stop playing until you’ve settled on a story that makes sense.

Ever thought your city’s subway system needed a total revamp? Download Mini Metro, which makes you a transport planner for a few heavenly minutes a day. You lay down subway lines to get passengers from A to B, only your city is constantly expanding, new stations popping up all over, and it’s up to you to join the dots.

It starts simple, and at a small scale it’s not hard to keep your metro system streamlined. But when your city starts to sprawl, and you can’t keep an eye on every line at once, it turns from an exercise of efficiency to one of plate-spinning. It’s an addictive formula, and we can’t stop trying to beat our high score.

The best mobile farming game is made for solo players: it’s made for long afternoons chopping down trees outside your house, for cold mornings sat on the side of a wooden dock with a fishing rod dangling in the water, and for manufactured morning routines to give your virtual life a sense of structure. It’s also very deep - far deeper than its cute art style suggests, and the turn of every season is a chance to master a new system or mechanic.

We love its freedom. You can dive into town life, talking to everyone you meet and making a circle of friends (and maybe even find a partner). Or you can be a recluse, shacked up on your plot of land, on which you methodically farm carrots and potatoes. Each of its mini stories can be ignored, but you’ll be missing out: they’ll consistently surprise you, taking the game in a new, unexpected direction. Time to plant your roots.

It’s Where’s Wally/Waldo, but on your phone, and better than the original because every picture moves. Your touchscreen adds an extra layer of interaction, and everything you tap will reward you with an adorable animation: bushes part their leaves, blinds unfurl in windows and birds take to the sky with a squawk.

Every sound is mouth-made, and they’re so good that it’s worth clicking on every object - not just the ones you’re trying to find - to hear what noise they make, from the buzzes of bees to the unzipping of a tent. When we hear the ‘ping’ you get for finding one of the many hidden objects in each level, we can’t help but pause, smile, and search for the next one.

An artistic puzzler about shifting perspectives with some of the most beautiful levels you’ll ever lay your eyes and fingers on. They’re wistful optical illusions: sprawling, curving structures that defy comprehension, but that you must learn to bend to your will. A few turns of a staircase here, a well-placed twist of a pillar there, and protagonist Ro can move onto the next screen, where you find a new colour palette and another, equally stunning building.

It offers enough resistance to keep you honest but it’s by no means a hard game, which makes playing it feel like floating through a dreamland, listening to an other-worldly soundtrack. It’s breathtaking, and you should play it more than once.

The Room is the best puzzle series on Android: four games, each crammed with unique objects that demand you twist, pull and flick them into shape until you work out how to progress. Every puzzle is tactile, and every item moves in satisfying ways, whether you’re cranking an old oven into life or reflecting lasers around a chess board. That physicality creates a feeling that you’re in a real space, rather than just a virtual playground.

Those puzzles hit the difficulty sweet spot other games struggle to find: they’re hard enough that it’s not always obvious what to do, but not so tough that you get stuck for more than a few minutes. Individually, they’re rewarding, but The Room strings them into an unending series, tying it together with drama and style. It’s magic.

Inkle’s mobile masterpiece feels as relevant and rich today as it did when it came out five years ago. You play Passepartout, valet to Phileas Fogg, guiding your employer around the world against the clock. On one level, it’s a resource management game: you have to plot Fogg’s route while making sure his finances and health remain intact. But it’s so much more than that. Each of the 150 cities you can visit exude character, and are brought to life by evocative descriptions that give you a sense of place and history, all with a few sentences and an accompanying image.

You can plot any route you want around the world, which means every run reveals new details, and venturing even slightly off a particular path can wildly change what you see. You can even just zig-zag back and forth, not making any progress but soaking up the atmosphere. Every world event and city tells a different story, and many stories span multiple nodes, which makes 80 Days feel reactive and alive. You won’t want to stop until you’ve seen everything it has to offer. It's progressive, anti-colonialist themes are a refreshing change.

If you're after some great freebies on Android, check out our list of the best free Android games you can play right now.