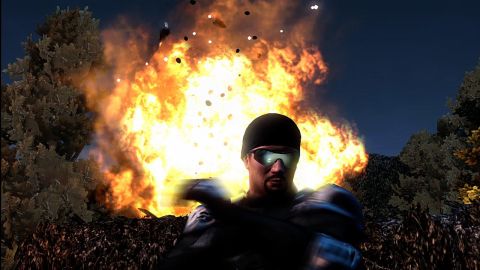 The best moments in Alpha Protocol come from choices you’re forced to make in a split-second. Should you execute a terrorist mastermind, or hear what he has to say first? Strike a deal with a crime lord, or take him down for trying to set you up? Be a strait-laced professional, or a smarmy jerk who irritates the shit out of everybody? All of these are decisions you’ll have to make throughout the course of the game, and all of them have the potential to profoundly affect the course of the story.

Well, not that profoundly. No matter what you decide, you’ll still be Michael Thorton, rogue super-secret agent working for a government agency that doesn’t officially exist. You’ll still visit the same places, meet (mostly) the same people and follow roughly the same progression of events as you try to foil terrorists and stop a sinister military contractor from sparking off World War III. But how those events are resolved, and who your friends and enemies are when they’re over, is largely up to you.

Developer Obsidian has picked up a reputation over the years as sort of a second-string BioWare, but if you’re coming to Alpha Protocol expecting a spy-flavored Mass Effect/Dragon Age/Knights of the Old Republic – don’t. Instead, what you’ll get is a fairly straightforward (and fairly buggy) mission-based stealth-shooter with light RPG elements welded on to make things more interesting. It also isn’t very good-looking, either, with dated-looking characters, stiff animation, a general unfinished look and weird facial expressions that only get weirder when you see them in motion.

Above: Does this smirk look normal to you? You may feel differently after you’ve seen him rigidly maintain it while talking

It’s also plagued by bugs across all three versions, which for us did anything from crashing the game (which happened rarely) to making certain bosses suddenly fall through the floor. Thankfully, the checkpoint-based save system is at least forgiving enough that you won’t lose too much progress when this happens.

Alpha does tell a good story, though. As you pursue Thorton’s mission, you’ll be able to travel more or less freely between Taipei, Rome and Moscow, following separate storylines in each (which can cross over depending on the order you follow them in). Between missions, you’ll hang out in souvenir-filled safehouses, where you can watch TV, read (and sometimes respond to) Thorton’s email and shop online for weapons, armor and new gadgets. (You’ll also be able to customize Thorton’s appearance a little, but that’s limited to adding things like beards and hats.) The rest of the time, you’ll be doing two things: shooting at people, or chatting with them.

The conversation sequences are where the bulk of Alpha’s decisions are made, and mostly they amount to having a few seconds to decide (from a simple menu) between three “stances” that determine your next reply: Suave, Aggressive, or Professional.

Above: Sometimes it gets more specific than that, and it’s not always limited to talking

Your stance determines not only how people react to you, but also how much they like or dislike you, and by extension what they’re willing to do for/to you. Talking to people, whether they’re informants in need of protection or creepy international terrorists, is less about saying the “right” thing than it is about learning how to manipulate them to get what you want.

Act professional around some super-serious operative, for example, and they’ll be more eager to help you, maybe even going so far as to sell you stuff at a discount or provide direct assistance on the battlefield. Act like a jackass, however, and they might end up hating or even attacking you, which can yield benefits of their own.

Above: You can make similar choices in the story’s framing device, an endgame interrogation between Thorton and villainous CEO Henry Leland

It’s an interesting approach to dialogue, and it’s fun to experiment and see how things unfold differently when you take a different approach to a problem. The choices you make aren’t limited to earning people’s trust with chat, either. Often, you’ll be faced with something that might be a clear decision in any other game, like executing that terrorist mastermind we briefly mentioned earlier: Sheikh Ali Shaheed, who appears after the first set of missions. Kill him, and you’ll remove a threat to world peace – but you’ll also ensure that his terror network steps up its violent activities. Spare him, however, and he’ll not only feed you vital information on the real bad guys down the line, but he’ll make sure that his goons treat you like an ally the next time you cross paths.