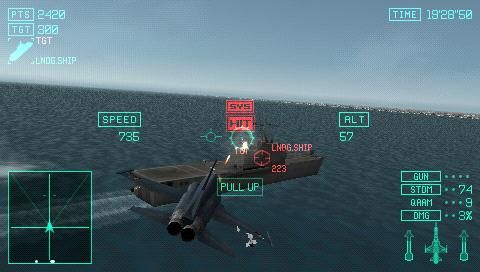 As much as we loved 2007’sAce Combat 6, with its crowded skies and multi-tiered missions, it was severely lacking in one key area – online co-op. Yes, there were a handful of short excursions you could play through with friends, but the thrilling campaign was still a single-player affair. Joint Assault on the other hand allows four players to tackle the entire game in either local orinfrastructure setups, which is a hugely welcome addition to the franchise. Imagine our disappointment when said campaign almost turned out to be more trouble than it’s worth.

Above: Co-op in full effect! But we wish it were in a different Ace Combat

The primary problem can’t be helped – the PSP’s control options. With no second stick or additional shoulder buttons, flight control can only be so accurate. If you’ve played any of the console games, attempting to pull off those same precise moves on the PSP, even with expert controls enabled, is a massively frustrating pain in the ass that’ll shred your wrists into mulch. The PSP just isn’t suited for this type of play, yet devs keep trying to cram the console experience onto a platfom with fewer inputs. We had this same concern with 2006’sAce Combat X, though that game didn’t suffer from additional gameplay issues.

For starters, many of the missions are retreads of past Ace Combat outings, all of which looked and played better on their respective platforms. That doesn’t mean they’re any less exciting or conceptually strong, it just means you’ve already done them once (or twice) on a system with proper controls. Everything from a giant rail gun to massive flying fortresses is here again, the latter of which appears something like nine times throughout the campaign. Before, these ominous aircraft would signal the end of the game or a massive, memorablefirefight – now they’re in almost every other mission. It’s not exciting when you’ve already faced one a dozen times, especially when downing these things takes forever and checkpoints are spotty at best.

Above: Plus they fly around like they weigh nothing, removing a true sense of girth or danger

That isn’t to say all the missions are a letdown. Some, like piloting a hulking 757 through a tiny ravine or hounding a series of enemy choppers that can’t be shot down, echo previous Ace missions but add new ideas that make them rare gems in otherwise so-so campaign. However, even during these relatively interesting sorties you never get the sense you’re in a war zone, as friendly aircraft seemingly fly around aimlessly, and one time we even saw an enemy jet blindly firing missiles at the water. This makes just about every jet that isn’t a mission-critical target an inconsequential flying hunk of metal.

The co-opalleviates these problemsto a degree. Most of the time all four of you fly the same mission with the same goals, helping each other out until the end. Others divide you into teams of two and send you on separate but interdependent missions – what your team does in one can affect the other team and vice versa. It’s a very cool idea, one we hope appears inAssault Horizonand subsequent Ace Combat games. These branching missions also exist in single player, though you have to choose which of the two missions you want to take on. Technically this does mean you can play through the game two different times and choose different missions. We finished the game in just over two hours, so it’s not a huge time investment, and given how pricey most of the cooler jets are, you’ll need to replay several missions to gain access to the best stuff.

Above: The camera is also pulled in a bit tighter, though switching between views has to be done in a separate menu

That said, the idea of playing the last mission ever again is not an appealing proposition. The last boss literally slides out of the way of incoming missiles, performing physically impossible moves that serve only to make him “hard,” but not in a rewarding sense. When we finally finished him off, the sensation was more relief than exhilaration.