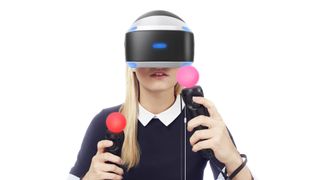 We're now in 'PlayStation VR is arriving next month' territory, so there's going to be no shortage of news about ways to buy the headset and its required accessories. Lo and behold, a listing on Australian games site EB Games has got a PlayStation VR - Move Controller Twin Pack for release on PS VR launch date October 13. This absolutely makes sense as while the headset does work with the standard DualShock, you'll want a Move Wand for each hand to truly get into experiences such as Batman: Arkham VR.

Price-wise, the pack is $119.95 in Australian dollars which is around £68/$90 US. It's not been confirmed whether these are new versions of the Move Wand but it makes sense that the previous USB to Mini-USB cables will be replaced with the PS4's Micro version. As reported by Videogamer, Sony reportedly applied for new certification for a new DualShock 4 and Move Wand last month. We've seen the new leaked DualShock 4 in action with its lightbar that can be viewed from the top so presumably this will be the new version of the Move Wand. We'll hopefully get confirmation and news of US and European releases later this month.