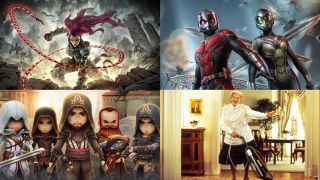 1. Black Friday 2018 is bigger (and longer) than ever, with a treasure trove of gaming deals no matter what you’re interested in

Not so much a Black Friday these days as it is an unrelenting black hole that continues to expand and engorge with each passing year, 2018’s season of pre-Christmas sales has officially begun across every major retailers online. The good news for gamers is that the Black Friday game deals are now rich and plentiful in number, with discounts on the best Xbox One bundles, PS4 Pro deals, Nintendo Switch accessories, and much more. We’ll be covering the latest and greatest in Black Friday’s gaming sales for the next week and beyond here on GamesRadar+, so be sure to check in every day for the best new deals and offers as they arrive online. Prepare thy wallet, dear reader, ‘tis the season for many a purchase. Alex Avard

What: Black Friday
Where: Everywhere!
When: Right now!

The fact that anyone thinks its a good idea to work with the folks at Jurassic Park these days is a searing indictment of workplace safety education. Still, that hasn't stopped Dr. Henry Wu (voiced by BD Wong) creating a new collection of hybrid dinosaurs for Jurassic World Evolution. That's the set up for the sim's new DLC, The Secrets of Dr. Wu, which adds a whole new mission, new upgrades and research options, and opens up new locations on Isla Muerta and Isla Tacano. Here's just hoping the dinosaurs he's been tinkering with aren't the giant, aggressive, carnivorous kind, or that lawyer that got eaten on the toilet will have died for nothing. Rachel Weber

What: Jurassic World Evolution - The Secrets of Dr. Wu DLC
Where: PC, PS4 and Xbox One
When: Out now

3. Will Darksiders 3 live up to the series standard?

There was a while there where we assumed we'd never get a third entry in the Darksiders franchise; now suddenly, Darksiders 3 is here. It feels like it's been a million years since the action adventure series got its start in 2010, with a style you could describe as '3D Zelda meets metal album cover art.' Darksiders 2 was something of an open-world sleeper hit - then THQ suddenly went bankrupt and Vigil Games shut down with it. From its ashes rose Gunfire Games and Darksiders 3, starring the whip-wielding Fury as she slays countless demons in the rubble of Earth following the actual apocalypse of legend. The premise of slaying the Seven Deadly Sins who've divvied up the ruined planet is enticing, and the combo-centric combat looks like it'll whip with the best of 'em, a la Castlevania or Soul Caliber's Ivy. But some of the crumbling environments we've seen look a bit bland and claustrophobic compared to the fantastical, sprawling vistas we explored in Darksiders 2. We'll have to wait and see if Fury's quest for revenge lives up to the standard set by War and Death before her. Lucas Sullivan

4. It’s been 25 years since Robin Williams dressed up as a fake nanny to take care of his own kids but Mrs Doubtfire is still a must-watch classic

If you think about it, 1993’s Mrs Doubtfire shouldn’t really be a widely watched movie anymore. It’s about a irresponsible father who, when his wife quite rightly has had enough, dresses in drag and repeatedly lies to his entire family in order to spend time with his children without her knowledge. Made during a time when the last thing on filmmakers’ minds was worrying about encouraging negative gender stereotypes, there’s so many reasons why Mrs Doubtfire shouldn’t fit into our more modern film-watching sensibilities today. And yet, as Mrs Doubtfire turns 25 this week, it remains a comic masterpiece which, despite its non-PC tendencies, fills our hearts with warmth and joy every time we watch it. Much of this is down to the star Robin Williams whose proven time and time again what a comedic genius he is, but I think we can all agree that his character makes many not-ok decisions throughout the film. But maybe put these problems aside for the weekend and revisit Mrs Doubtfire for its anniversary - after all, there’s only one film where Williams lights his fake breasts on fire and has to put them out with pan lids!

What: Mrs Doubtfire 25th anniversary
When: November 24, 2018
Where: Everywhere!

5. Will Fortnite's Winter Royale give another lesser know player some time in the spotlight?

Epic has been adapting and changing its Fortnite tournament structure for a while now with the latest addition being in-game pop-up events that only last a few days. The Winter Royale however will be THE competitive tournament for the snowy season. Entry is open to everyone and there's a $1,000,000 prize pool up for grabs should you manage to advance to the finals on the 30th of November - 1st of December. The best thing about these tournaments, apart from the fact you don't have to leave the house to enter, is that it's not restricted to the best Fortnite streamers and pro players. Yes you'll get the usual suspects like Myth, Ninja and Tfue entering but as we saw in the summer skirmish - won by the relatively unknown iDropz_Bodies - anyone can win. Of course that victory wasn't without controversy. Perhaps angry at being beaten by an unfamiliar name some players accused iDropz of cheating and using a mouse and Keyboard against PlayStation 4 players which lead to an investigation by Epic. They concluded that no foul play had taken place but did say "we do not restrict input device for players on our platforms in an effort to promote accessibility for our entire audience". Read into that what you will but with the qualifiers taking place this weekend we'll soon see if another unknown player can take home the prize.  It could be you! Or me! But most likely you. James Jarvis

6. This War of Mine Complete Edition is out on Switch, and shows the side of war Call of Duty and Battlefield doesn’t tell you about

With the winter season rolling in, temperatures dropping, and warmth becoming something we all crave when we get in after a long, hard day, spare a thought for the characters of This War of Mine. The indie game takes place in the middle of a terrible war, where cold ravages the ruined city and you have to try to survive. Scavengers, snipers, even other civilians asking for help - there’s plenty that can put you in danger in This War Of Mine (which makes it kind of depressing), but that’s why it’s a crucial game to play if you want to see the side of war Call of Duty: Black Ops 4 and Battlefield 5 don’t tell you about. You’ll be scavenging for food, water, and supplies, and medicine in the war-torn world, being forced to make difficult decisions about who to help, and who to leave behind. The complete edition is out on Switch soon and also comes with This War of Mine: The Little Ones, a DLC all about what it’s like to live through war as a child. Oh, and there’s another DLC included called A Father’s Promise, which is likely just as heart-breaking. So if you wanted an antidote to the Christmas cheer...this is it. Zoe Delahunty-Light

What: This War of Mine
Where: Nintendo Switch
When: November 27

I don't know about you but I'm still chasing the platinum trophy on Assassin's Creed Odyssey and making doubly sure I've seen everything Ancient Greece has to offer, but Ubisoft has sneakily released another Assassin's Creed title. No, it's not another fully fledged console offering (you'll have to wait until at least 2020 for that), but rather a ridiculously adorable chibi-shaped mobile offering. Never before has assassinating been this cute. It's part Fallout Shelter-style base building where you try and collect assassins, level them up and build a thriving murderous community. But, your little chubby faced assassins also go on brilliant adventures where you're doing turn-based assassinating utilising your chibi-ssassins' skills in a thoroughly combat system with a wonderful storyline. Honestly, don't dismiss this one as 'just some mobile spin-off' because it works incredibly well and even has some familiar faces to discover. Sam Loveridge

What: Assassin's Creed Rebellion
Where: Android and iOS
When: Out now!

8. Ant-Man and the Wasp arrives on Blu-ray so it's time to scour the extras for Avengers 4 clues

Ant-Man and the Wasp arriving on Blu-ray gives us another chance to enjoy some lighter superhero action on the fun end of the MCU spectrum. Paul Rudd, Evangeline Lilly and Micheal Douglas are great fun as the size changing underdogs. This time the story focuses on finding the Wasp's mother, lost in the Quantum Zone since the 60s, while also battling a phase shifting enemy called the Ghost who can pass for through walls. However, the real plot arc will be fans scouring the extras for any shred of a clue towards whatever Avengers 4 might be doing next. Leaked concept art of Hank Pym's Quantum Realm suit has already suggested that's what the Avengers might be wearing in the new movie, so the question is what else can we learn...?

What: Ant-Man and the Wasp on Blu-ray
Where: At a retailer near you
When: Out now