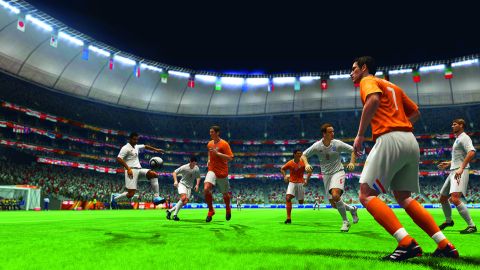 EA’s World Cup games used to suffer from a lack of effort; now they’re built to look effortless. 2010 FIFA World Cup exudes the confidence of a development team at the top of their game – orchestrating the bigger picture with myriad subtle prods and pokes, like Zinedine Zidane in his majestic, late 90s pomp – rather than relying on showy gimmicks to deflect attention from fundamental weaknesses.

For example, when using the right stick first touch, Bellamy might flick a bouncing ball over his head to keep momentum, rather than trapping it on the ground, while midfield schemers like Fabregas might automatically opt to heel flick a one-touch pass in a crowded midfield. Shooting also benefits from context-sensitive animations, resulting in goals like Joe Cole’s delicate flick in the recent Manchester United game with a simple tap of the shoot button.

Visually, it’s brighter and crisper than FIFA 10, with – for the World Cup teams at least – improved likenesses. Sadly, for fans of Ireland, Wales and, er, Aruba, ‘star’ players like Damien Duff are decent, but more generic – forgivable, given the 199 team roster. There are new, more ostentatious, goal celebrations – Heskey doing the moonwalk never fails – plus authentic manager likenesses, although the cutscene breaks start to intrude.

The penalty system is deeper, but initially bewildering. You need to stop an oscillating ‘composure’ bar in its central sweet spot, then direct the shot ‘blind’ using analogue pushes. Top players have a bigger sweet spot, but the bar speeds up subject to the occasion. Problem is, even when you nail the composure, gauging the length of analogue stick pushes is highly demanding. Initially, your shots either go straight, or blaze wide. The practice arena lets you see how the ‘invisible’ shot pointer responds to your analogue pushes, but in-game, it’s still slightly nebulous. Our tip? Practice. A lot.

There’s an admirable range of modes – from the Be a Pro aping Captain Your Country, to Story of Qualifying, to a full World Cup qualifying campaign, leading up to the finals. Thing is, seeing your players lift the World Cup is only truly magical the first time out. Our advice? Play one difficulty level higher than usual to prolong the experience. We, er, had to replay the World Cup final 13 times, before Wales finally bested Brazil on World Class difficulty, but the roar was deafening.

FIFA WC’s online modes will be the test of its longevity, but as we type, the servers aren’t live. Given FIFA 10’s proficiency, they’re unlikely to disappoint. Gripes? Mid-match menus are slow as ever, making substitutions really irks, and the lack of club teams or non-World Cup tournaments is an unavoidable loss – but it’s as broad as the limited scope allows, and as a game, unarguably better than FIFA 10.

Essential? Almost – but only if you’re committed to playing online or with friends. As a solo game, it’s as authentic as you’d hope, and the scenarios prolong longevity – but the focused approach is inherently limiting. Effortless as they make it look, EA have set a dauntingly high watermark for FIFA 11 – leaving Pro Evo with all the busy work to catch up.