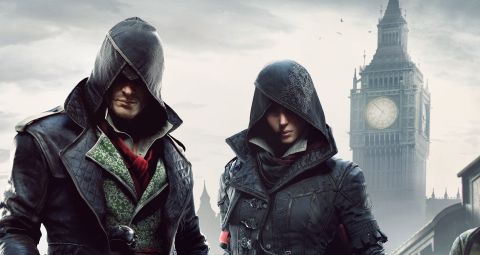 Victorian London is the star of the show here, and although some old gameplay problems linger, it hasn’t been this much fun to wield the hidden blade in years.

It’s been a long time coming but we’re finally here: Victorian London. And it’s a monster. Twins, gangs, blades and Templars - Syndicate offers up some of the most joyful Creed moments in years. The glee of fast travelling to the mast of a ship in the middle of the Thames to watch smoke puff from steamboats as they make their way happily down the river. The fun of zooming up a chimney with the rope launcher in Lambeth only to hear a train and catch a glimpse of it as it chugs across a bridge between buildings in the distance. There’s a simple, childlike joy in just watching the pieces of Syndicate’s London work together like a giant model set and then a deep satisfaction as you jump in and cause absolute chaos. Add in a rollicking Creed yarn and two genuinely entertaining Assassins and this is the most assured entry in the series since Black Flag. Oh, and London? It’s spectacular.

We’ve seen a lot of men in hoods by now; Jacob Frye has all the hallmarks of a stereotypical Assassin, with his rugged jaw and fashionable stubble... but despite this familiarity, he and his sister Evie are instantly likeable. A snappy script and physical comedy makes it genuinely pleasurable to spend time in their company. In fact, you’ll probably laugh out loud at the series for the first time since Mario Auditore uttered his infamous introductory line “It’s-a me… Mario”. While Jacob is a lovable buffoon obsessed with causing carnage, Evie is sarcastic and damning of her brother’s disregard for the rules of the Brotherhood, but equally likeable and sweet. Each has their own story missions - Jacob is knuckling down on Templars while Evie hunts for a Piece Of Eden - but when it comes to the open-world you can choose who you want to explore as.

Switching between the two mid-exploration always comes with a neat little reaction. “Finally, I was getting bored,” quips Jacob when you eventually relinquish Evie’s extra throwing knives and charming company. Helpfully, while both have their own individual skill trees, the pair share money and gear and every 1000XP you earn will net both a skill point to spend whether you’re playing as them or not. While Evie is tipped slightly more towards stealth, and Jacob brute force, there’s no stopping either being stealthy or deadly with the new close combat update.

Cane swords, knuckle dusters and a nasty knife known as the Kukri are now your Assassin weapons of choice. These complement the hidden blade nicely and mean combat is much more, err, snuggly than before. While it’s still a case of countering enemy swings and breaking defence, fisticuffs have a more satisfying feel than in Unity. There still isn’t the smoothness of Batman but transitioning between opponents feels solid, and sending multiple enemies into a stooping, zombie-like state will net the most inventive multi-slaughter animations I’ve seen in games. Cane, meet eyeballs, eyeballs, meet cane.

Jacob and Evie each have their own skill tree which means you can personalise them accordingly. They’re mostly the same but with a few tweaks. Evie can carry more more powerful skills such as Evie’s Chameleon ability where she can effectively disappear when staying still is 6 skill points, as is Jacob’s counter attack that guarantees a headshot so plan accordingly.

Stealth too has had a major, not to mention welcome, overhaul. No longer mapped to a shoulder button, tapping x will switch out your top hat for a hood and put you into a crouch. While in sneak mode, cover is now automatic so you’ll finally stick to objects (in a good way this time) and it means infiltration is a far more slick experience. Whether you’re entering one of the child liberation missions from a skylight or sneaking into a gang stronghold through a window, this is the first Creed that feels like not getting detected is a real possibility.

Add in the new freedom of movement offered up by the rope launcher and, despite the inevitable descent into chaos at any minute, Jacob and Evie have enough tricks up their sleeves (hello return of the whistle) to make sneaky slaughter an absolute pleasure. There’s an increased emphasis on unique kill opportunities, multiple entry points into missions, or the chance to go in all guns blazing - but more importantly, these opportunities are better signposted than ever.

While these main missions see you targeting the pantomime Templar, Crawford Starrick, in the game’s finely crafted story, the real fun is in exploring and taking over London itself. Yes there’s a lot to do, but it never feels like the map is overwhelming, only that you’re going to get distracted on the way to wherever you’re going. Spotted your ridiculously cool train hideout chugging on by? Aah, it would be nice to pick up money from the safe... but hold on! Is that a carriage of cargo that needs to be stolen in a mission to net some loyalty points with Rooks member Ned Wynert? Let me just hurtle across the street with my trusty rope launcher. Oh, wait, is that a civilian needing saving? Expect to be late. For everything.

These should be your first port of call to start improving London. Little Rooks is an especially useful add on as it employs half the kids across London as your pickpockets who’ll handily turn over a stack of money and craftables. Just don’t ask where that £5K came from.

Every mission you do will earn you various bits for your Assassins. From belts to gauntlets, these are useful for defense and attack and also make you look pretty dapper too. Head into the menu and make sure you’ve got the best possible equipment for the job.

Do some Penny Dreadfuls

If you’re playing on PS4, the Dreadful Crimes missions are based on popular pulp crime fiction from around the time. Use your Eagle Vision to bring up Sherlock style clues and interrogate suspects before deciding on who deserves justice. Well, actual justice. Not just your blade. You murderer.

Not just hella fun to play Assassin Frogger across, the Thames is covered in cargo to steal that comes in useful for weapon crafting and gang upgrades. Those pesky Blighters are also dealing in contraband for you to destroy and earn XP.

Head to see Robert Topping and Ned Wynert from the get go (R and N on your map) and you’ll unlock fight clubs, carriage races and the chance to steal a load of loot from the Blighters. You’ll thank me later.

Keep up to date with your crafting. If you keep an eye out for gold chests in the world, these can have schematics for better gauntlets and weaponry. Provided you’ve got the crafting goods, you can make your own arsenal.

Among the collectibles in the game are beer bottles, pressed flowers, Helix Glitches but also the interesting Precursor Tokens. These are hidden inside music boxes across London that tinkle away happily to let you know where they are so keep an ear out.

AC loves its historical figures and Syndicate is no different. Marx, Dickens, Darwin and even Queen Victoria are awaiting with memory missions for you to go through. It’s a nice change of pace and you might even, dare I say it, learn something.

And then there’s the actual city. A sprawling character in itself with unique districts and boroughs, London is beautiful and stretches on forever (well, it’s pretty big as game worlds go) as you take in the sights from a viewpoint or clatter over a bridge on a stolen carriage. Add in Austin Wintory’s beautiful, ever-changing score and there hasn’t been a sense of atmospheric life like this since AC2’s Venice. The Thames is a playground of activity and something I could spend this entire review talking about. Teeming with life and industry, hopping from boat to crate to paddle steamer is a genuine rush. Those worried that vehicles would be too much for the Creed couldn’t be more wrong. Carriages almost sound like an afterthought here but you’ll quickly find yourself hijacking one just to have the inevitable fun of ramming enemies dramatically off the road in the Victorian equivalent of Burnout Takedown’s destruction sequences.

And the bad? Few still play Assassin’s Creed for its main missions and - while there’s a strong narrative winding its way through the game and a cracker of an ending - Syndicate does little to improve these. Tailing isn’t as prevalent as before, and it’s made significantly easier by the rope launcher… but it’s still a recurring theme and leaves some missions feeling stilted and frustrating. Whereas the game starts with two ultra confident sequences taking clear inspiration from Uncharted and even Tomb Raider, later ones start to feel slow, stuttery, and rote - problems the series has faced for several years now.

It’s also worth saying that in my 40-hour gameplay session, I did catch sight of a few bugs but nothing more than you’d expect in such a huge open-world. Perhaps you were hoping to see half of Evie’s face or infinite Rapunzel style hair billowing from under Jacob’s top hat? Sadly not. Instead I’ve just the odd broom standing up alone and a few visual hiccups. Not game breaking, but not as polished as Arkham Knight’s Gotham, for example.

Syndicate’s scale and sense of London being a living city really does compensate for the rough edges, though. Even now, I still have boroughs to liberate and I’ve only scratched the surface of the memories of Marx, Darwin, Dickens and even Queen Victoria. There’s also a wonderful spoilery surprise that I won’t reveal which won’t just send lore fans into giddy excitement but will be a genuine joy to experience for everyone.

Combining both traditional and new Creed stories with its dual narrative, Syndicate not only manages to deliver a cohesive and satisfying tale but it does so within one of the finest settings the series has ever seen. No, it isn’t perfect, but with such a beautiful world, a genuinely likeable cast of characters, and many improvements to both stealth and combat this feels like a step in the right direction for Assassin’s Creed.

Victorian London is the star of the show here, and although some old gameplay problems linger, it hasn’t been this much fun to wield the hidden blade in years.