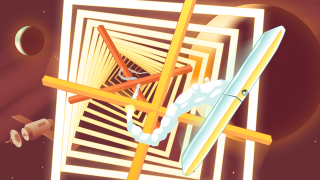 A fiendishly difficult, frantic action game that demands your absolute focus on its simplistic sprites

OlliOlli, N++, Super Meat Boy - really any game where repeated failure is just a prelude to your triumphant success

I earned Flywrench's Successive Failure trophy - awarded for dying a total of 1,000 times - after playing for about two hours. Since then, I've spent 30 minutes trying to finish a single level that takes less than 30 seconds to complete. At times, I've found my thumb tensing up from the strain of frantically tapping buttons - that never happens to me. And through it all, I've enjoyed Flywrench immensely. If you're not discouraged by anything I've just described, you owe it to yourself to test your mettle against the exacting challenge that is Flywrench, and discover its hypnotically difficult joys for yourself.

Flywrench originally dates back 10 years to a 2007 Flash game created by Messhof, who would go on to garner widespread indie acclaim with the pixelated fencing of Nidhogg. This modernized update doesn't stray too far from those humble beginnings: basic lines and shapes comprise its spartan visuals, and the two-button controls are easy to grasp. You control the Flywrench, a brick-shaped spacecraft that swoops around each bite-sized level, and must morph your ship to gain momentum and pass through colored obstacles. Tapping X makes Flywrench flap in the air like a bird, which is red by default, and holding Square makes you spin like a green baton that bounces off walls. I say 'default' colors because Flywrench includes a wide variety of playful, inventively named color themes you can interchange just for the heck of it, akin to N++ and Downwell.

Like any deftly designed game of demanding difficulty, Flywrench eases you into the swing of things with a series of levels teaching you the basics, letting you come to grips with your ship's tricky inertia and delicate fragility. Touching the walls in your basic and flapping forms instantly restarts the level (unless you opt to play on Easy mode), as will coming into contact with a colored blockade when you're anything but the same color. Flywrench presents a nifty, vaguely Rez-like framework where you're breaching satellites that orbit around all the planets in our solar system, slowly working your way towards the Sun itself. With upwards of 150 levels to zip through, and plenty of fresh mechanics added in along the way, you're given plenty of time to get your bearings before you're thrown into the difficulty deep end. If one particular stage is giving you trouble, you're free to skip it and try something else - progression in Flywrench is steady yet flexible, and you'll often be amazed at how far your skills have come when you go back to a level you bypassed and breeze through it.

All the while, you're treated to a sublime electronica soundtrack curated by Daedalus (whose music I highly recommend in general). I've written before about the drug-like power of music in demanding games, and Flywrench fits the bill, soothing you with its blippy beats so that frustration never intrudes (at least in my experience). The rigorous difficulty, instantaneous retries, and stellar music all blend together to put you in a trance-like state, where it feels like you and Flywrench are as one. Later levels are structured like miniature puzzles that require twitch-reflexes to solve, and sometimes you might surprise yourself by rushing to the warp goal as if driven purely by instinct, the resulting sense of triumph surging through you like an electric shock. The feeling when you finally finish a level after hundreds of attempts can only be described as elation. Yet you'll probably bask in your great victory for only a brief moment before excitedly diving into the next stage. That's just the kind of complete captivation Flywrench can instill.

If you're a sucker for fiendishly tough games that might look like borderline masochism to some, you should absolutely take Flywrench for a spin. While this iteration of the game first debuted on PC in 2015, the PS4 port has a new set of devilish stages to make up for the lack of the PC version's level editor. Even after you've conquered every satellite, that's just a precursor to chasing after the fastest planet completions on the Time Trial leaderboards. For those of you who have ever faced a staggeringly tough-but-fair game challenge and refused to give up until you finally persevered, Flywrench will positively delight you.