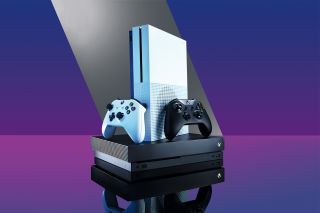 It’s a little ironic, considering the name, but there are two Xbox One consoles to choose from.

The Xbox One S and Xbox One X are both upgraded versions of the original Xbox One, which launched in 2013. Both the One S and One X offer more power and features, with the latter being more powerful than any other console on the market. Like a high-end gaming PC, the Xbox One X is capable of native 4K HDR gaming at 60 frames per second, which makes games look and play their best. Both are also compatible with the best Xbox One accessories.

If you have a 4K TV, exclusive Xbox games like Forza Horizon 4, Sea of Thieves and Gears of War 4 all run at your TV’s native 3840x2160 pixels, making for a super-sharp image with masses of detail compared to the older Xbox One. If you’re lucky enough to own a 4K HDR TV (high dynamic range), you get more vivid colours and much improved contrast too.

Third party games also look best on Xbox One X, including Ubisoft’s Assassin’s Creed Origins. It uses the console’s superior hardware to deliver a crisp image and incredible draw distances, the latter making for a tangible gameplay upgrade that lets you see more of the world at once in order to pick out missions and spot enemies. Origins runs well too, with the game utilising the 4.5x graphical power increase from the original Xbox to deliver a silky-smooth frame rate.

The Xbox One X also promises excellent performance for upcoming titles like Red Dead Redemption 2 and Battlefield V, both of which are set to offer the most graphical flourishes on Xbox One X (PC notwithstanding, of course). While PC players regularly see performance and graphical upgrades beyond what you see on consoles, the Xbox One X with its custom graphics hardware (which, on paper at least, is almost as powerful as a £450 Nvidia GTX 1070 PC graphics card) drastically reduces the gap.

The Xbox One X also sports a surprisingly slick design. Unlike Sony’s PlayStation 4 Pro, which is considerably bigger than a standard PS4, the Xbox One S and Xbox One X are much smaller than the original Xbox One—they even have an integrated power supply, removing the need to find space for a bulky box next to a plug socket.

Despite being the most powerful console around, the Xbox One X is actually the smallest of the lot. It’s masterfully compact and there are no frills or unwanted pizzazz on the outside either.

Instead, it’s sleek, black and uniform in appearance. It doesn’t bring unwanted attention to itself when sat in a media unit or next to TV. That might not sound like a positive, but the One X’s understated appearance is the best Microsoft has produced to date. After all, not everything needs to be super-shiny or covered in flashing lights to be a true gaming product, particularly in sophisticated AV setups.

Should you have more modest requirements, the Xbox One S is a fantastic console in its own right, too. It’s capable of upscaling 1080p (full high definition) games to 4K, which produces a sharper image.

Just like the Xbox One X, it also has HDR support, making for brighter, more vivid colours. It makes for an amazing experience in Forza Horizon 4, which takes full advantage of the tech by rendering gorgeous vistas of the British countryside as you whip around it in a ludicrously expensive Lambo.

Not just for gaming

Both consoles also play 4K UHD Blu-rays, something that neither the PS4 and PS4 Pro can do. If you’re looking for an affordable 4K Blu-ray machine, at £249.99 the Xbox One S is the best value machine of its kind on the market, especially when you consider that it streams media from a variety of subscription services (including Amazon, Netflix and Spotify) and plays the latest games too. It’ll see you through the next couple of years of gaming with ease.

If you’re after the latest and greatest tech and want a little more longevity out of your console, The One X is the way to go. Sure, at £449.99, it’s considerably more expensive than its little brother and the PlayStation equivalent, but the excellent performance and extended lifespan are more than worth it if you already have a 4K HDR TV. No other console can deliver the graphical fidelity of the Xbox One X, with a significantly more expensive (not to mention complex) gaming PC being the only true alternative.

Considering the cool reception the original Xbox One received at its debut in 2013—a not entirely undeserved reception given the plans for the console at the time—that Microsoft now has the most powerful console on the market is quite the turnaround.

Microsoft’s commitment to backwards compatibility, which allows you to play a variety of original Xbox and Xbox 360 games on Xbox One, as well as innovations such as GamePass and CrossPlay (for game streaming and cross-platform multiplayer game respectively) make it the most consumer-friendly console on the market too.

Simply put, there’s no better way to play games, stream media or watch a 4K Blu-ray than the Xbox One S and Xbox One X—at least until whatever’s next for Xbox and PlayStation hits store shelves.