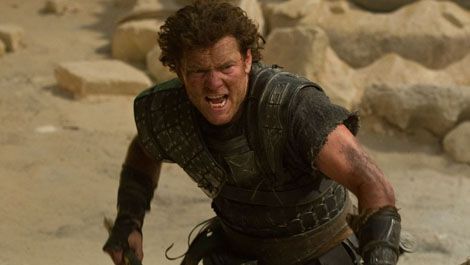 If studio sequels operate by the law of diminishing returns, then Wrath Of The Titans is the rule-proving exception.

Of course, it helps that the 2010 remake of beloved 1981 fantasy adventure Clash Of The Titans set the bar lamentably low. Fortunately, its $493m gross allowed Sam Worthington & Co another go; this time, they don’t disappoint.

Making a pact with giant CG-monster Kronos, the father they long ago incarcerated in Tartarus, “great prison of the Underworld”, Hades has been promised immortality – but only if he imprisons Zeus so the Titan leader can feed off his son’s powers and escape his fiery jail.

Underused in Clash , Neeson and Fiennes get far more face time here, with the added pleasure of Carlos star Édgar Ramírez (as Ares, Zeus’ godly son, who sides with Hades) chewing serious furniture with them.

Perseus, meanwhile, calls upon Andromeda (Rosamund Pike), no longer a Kraken-fearing damsel in distress but a rock-hard warrior queen, as they search for Tartarus. Newcomer Pike proves a gutsier Andromeda than previous actress Alexa Davalos was allowed to be.

Toby Kebbell, along for the ride as Perseus’ cousin, Agenor, adds a much-needed light touch (even if he’s saddled with lines like “I thought I’d give them an eyeful” when a Cyclops attacks).

Only a misfiring Bill Nighy baffles as “fallen” god Hephaestus, his eh-oop accent and hirsute look making him appear like the love-child of Brian Glover and Catweazle.

With Battle Los Angeles ’ Jonathan Liebesman replacing Clash Of The Titans ’ Louis Leterrier, Wrath learns from so many of the 2010 film’s mistakes, not least beefing up the father-son emotions (Perseus is now a father, while Ares suffers from serious daddy issues).

As for the visuals, Tartarus looks splendid, and from the early moment when the camera dives through the rocks and lava to take us there, the 3D has been vastly improved. Some of the set-pieces are also breath-snatching – notably the rotating labyrinth Perseus and pals must navigate.

Liberated from having to release the Kraken, the film’s parade of monsters also thrills (particularly Kronos). As Zeus says, “Let’s have some fun.” And Wrath certainly manages that.