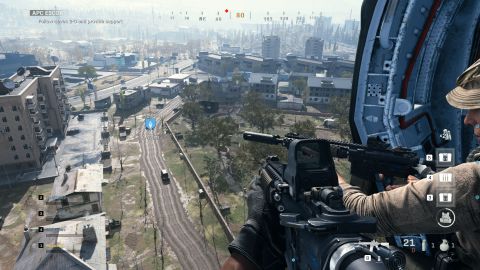 First introduced in Modern Warfare 2, Call of Duty’s Spec-Ops mode has become a much-loved feature of the Modern Warfare games. Originally, it allowed two players to work together in a series of carefully crafted missions. In Modern Warfare 3, the mode was expanded to include a survival mode, and specific classes that players could assume.

For this reimagining of Modern Warfare, Infinity Ward has rebuilt Spec-Ops from the ground up. Rather than a sequence of individual missions, Modern Warfare’s special operations offer a coherent story that ties into the main narrative, featuring four large missions that players can approach from multiple different angles.

Special-Ops sets it action in the city of Verdansk, which has been invaded and occupied by the forces of a previously unknown Al-Qatada general. Allying with the FSB’s Sergeant Kamarov, CIA handler Kate Laswell has created a joint task force known as Armistice to track down an eliminate this new threat, a task force that you will form a part of.

Joining up with up to three other players, your mission comprises four separate operations, through which you will sever Al-Qatada’s stranglehold on Verdansk. These include Operation Headhunter, where you must track down and eliminate an Al-Qatada Lieutenant known as Almalik, and Operation Paladin, where you must venture behind enemy lines to extract a scientist with intel on a weapons dealer known as “Mr Z”.

Unlike earlier iterations of Spec-Ops, these operations are not scripted, linear experiences. Instead, they take place in large, open environments which you can traverse either on-foot or by vehicle approaching the objectives using whatever tactics you choose. Do you use silenced weapons and stealth, taking out enemies with long distance shots and silent close quarter takedowns to complete your goals undetected? Or do you go all out assault, taking the enemy forces head-on with all the force you can muster?

Whichever option you choose, your enemies will not go down without a fight. The Al-Qatada forces will respond dynamically to your actions, using everything at their disposal to get the better of you. They may send in reinforcements by helicopter, or deploy hulking juggernaut soldiers who can waltz through heavy gunfire with ease. They might launch a barrage of smoke grenades to obscure your lines of sight, then advance through the cloud to attempt to get the drop on you.

Whichever mission you select, don’t expect a straightforward route to victory. You’ll need to work together, taking advantage of specialised ammo, grenade and armour drops whenever you can. Your efforts in Spec-Ops carry over into your general multiplayer progress, helping you unlock new weapons, equipment, and specialist operators.

Should you succeed in completing the four operations, further co-op action awaits in the form of “Classic” Spec-Ops. The initial “Safeguard” map sees you defending a fortified position against increasingly challenging waves of enemy soldiers, who attack using vehicles, mortar support and tanks. And this is just the first of several Classic Spec Ops maps Infinity Ward plan to add over the coming months, as well as Survival Mode, which will arrive on PC next year. In this way, Modern Warfare brings a whole new meaning to the term “Combined Arms.”