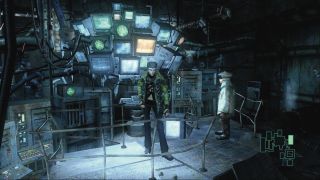 Sometimes there’s nothing better than revisiting an Xbox old game you love. Sure, they rarely quite live up to modern standards, but they can be like a comforting digital hug thanks to the familiar surroundings and sense of nostalgia. Other times it’s just nice to treat yourself to a bit of a history lesson for a classic that you’ve missed.

After all, there are so many that deserve a second chance, perhaps all gussied up with an HD touch-up and some extra little treats. So with that in mind I recently decided to pick up Phantom Dust, since a fair few people had raved about the original and how ‘unique’ it is. I figured I’d discover something new by playing it and maybe learn a thing or two about games from that era. But all I did was leave disappointed.

It all starts out fine. The visuals are, of course, a bit ropey and the fashion sense is laughably bad, taking an extreme approach to the cliché of RPG characters covered in belts, but you expect that from a game made in 2004, so it’s weirdly charming. The story has a lot of amnesiacs, and you probably would have described its brand of apocalypse as ‘edgy’ back then, but now it’s adorably cringey, like finding old photos of yourself as a child wearing a bandana and a chain wallet. Then you get to your first set of fights, that famously ‘unique’ battle system presents itself and you quickly realise that everyone has misused the word unique and what they really meant is ‘it’s so bizarre that there’s a good reason it was only ever used once’.

You basically play as a psychic who can manipulate dust into things like fireballs and shields to use in a fight, but instead of being able to use these abilities normally you have to collect orbs that are dotted around the map and then place them on your face buttons. For example, when you find the orb for ‘Fire Bullet’ you can then assign it to your A button to actually use it. After that you’re limited by your Aura. Every move has a cost – for example two Aura points – which is taken from your total. If you use up all of your Aura you then have to run around in circles in an uninspiring landscape and wait for it to fill up again.

To be fair, getting used to the system is an interesting challenge for the first few battles, but every stage is irritatingly similar – so it quickly becomes frustrating. Phantom Dust is often described as having elements of a card-collecting game because you have to pick up various different abilities (you unlock more options as you progress), but it really doesn’t feel very strategic or give you that satisfaction of finding something shiny and new when you get an ability.

I do feel a little guilty turning my nose up at a game that’s basically free, but the combat is so ancient and uninspiring that there’s also no real reason to spend any money on microtransactions either. It just feels so weird that of all the great retro Xbox games that are out there, this is the one that was given the remaster treatment. Where’s the Morrowind remaster, or the original Fable? There are so many interesting choices out there compared to this. It doesn’t even look particularly nice – no matter how high-res a screen is, there’s no fixing how drab and brown an environment looks.

Still, I guess I did end up learning something useful from this history lesson: sometimes the past is better left alone.