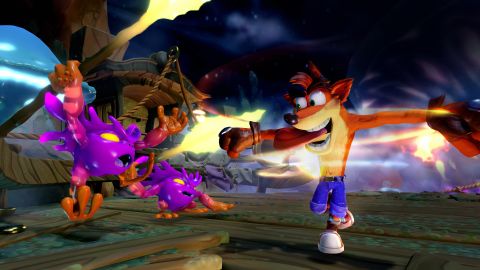 Skylanders Imaginators is rich with customisation options, and a genuine sense of fun makes this a brilliant addition to the series.

Fine, I admit it: I’ve been known to show off my Destiny Hunter to friends in the pub. I have a folder of pictures of her halfway up Felwinter Peak on Facebook, looking all cloaky and cool. But why does this trivia matter except to put me on all manner of watch lists? Because the first thing I want to tell you about in Skylanders Imaginators, instead of the gorgeous environments or fast-paced combat, is Pringle, my Fire Knight. He might be named after the snacks I had on my coffee table at that moment in time, but he’s mine and we’ll never tell him that. For the first time ever, Activision’s Skylanders hands over the power to make your own hero instead of having to use the pre-prepared plastic models. They’re still here, of course - there’s cash to be made, so more on them in a bit - but the big sell this year comes from handing over what’s known as an ‘Imaginite Creation Crystal’, and it’s not-so-quietly brilliant.

No matter which of the starter packs you choose - go for Crash Bandicoot and Neo Cortex on PS4, you know you want to - Imaginators comes with at least one of these Creation Crystals. Pop it onto your glowing Portal of Power (a plastic plinth that plugs into your console via USB) and, as it pulses pleasantly like an actual rune in your living room, you can select what Battle Class you want your Imaginator to be. It’s worth noting here that whatever you choose, from Brawler to Swashbuckler, you’ve got it for good. Once you’ve selected a class, there’s no option to reset, and you’re permanently set to one of the ten options. While this is clearly a hint to buy more crystals, each of which are tied to an element in the game, what you get for each one is impressive. Once you’ve selected your class, it’s customisation time and this is no regular creation tool.

While there’s the standard options of hair, eyes and face, Imaginators also gives you the ability to customise legs, arms, chest, and add bonus tails and ears. Each of these can be personalised further. Who knew that tail width could be so important, or that you’d spend so long altering the colour of arms? Nobody writing this review. Out of the hundreds of items available, Pringle ended up with a dragon tail, snake arms, a hooded head and giant blinking blue eyes that make him look a little like Toothless from How To Train Your Dragon.

But that’s not even where the fun stops. Once you’ve decided how your Imaginator looks, there’s a catch phrase to construct, voice to pick and even a soundtrack to select that plays while your Skylander hurtles around. Pringle shouted “I will avenge my nightmare” for a while, before I decided it was a little sombre and went for the far more upbeat, “check out zombie dance parties.” It’s an extra layer of customisation that genuinely enriches the experience. Add in dedicated selfie spots to take pictures of your Imaginator, and this is all about you.

The customisation doesn’t end there. Weapons and gear are unlocked in both the hub world and individual levels. They each have their own stats and boosts, and are basically Activision’s gateway drug to Destiny, unlocking via coloured crystals that come in four levels of rarity. Yep, start the kids early, why don’t you? Break each crystal and you’ll instantly have new loot to equip for increases in various stats. I found Pringle a little sluggish, so focussed on accessorising accordingly. Add in multiple combat moves to buy with in-game loot, and there’s an overwhelming amount of choice on offer.

On top of the main game, where you’re joined by none other than Spyro The Dragon and his friend Stealth Elf on an adventure to save the universe from the dastardly Kaos, there are a number of bonus ‘realms’ to unlock. These are opened using characters called Senseis, each of which hand over stacks of bonus moves, weaponry and an overall stat boost to your Skylanders. It’s through buying more of these that you’ll open up even more of the world, but you won’t need to do that for hours.

There’s swathes of content with the starter packs. The excellent campaign takes you through beautiful, sprawling levels of platforming, with puzzles to solve and gongs to ring, after which Senseis battle hordes for extra rewards. The satisfying combat means you’ll want to test them out, too. Each character has its own fighting style and bonus moves, and things get enjoyably chaotic. Pringle ended up with a fire attack a bit like a flaming grenade that burns enemies to a crisp. Because Pringle is a... no, never mind.

Where Disney Infinity always seemed somewhat sterile in its world creation, instead depending on its character roster, Skylanders pours life into these environments. Whether you’re trying out Crash Bandicoot’s exclusive Thumpin Wumpa Islands, compete with dancing palm trees and in-jokes galore, or leaping between pirate ships and avoiding cannon fire, there’s vibrant life everywhere. Throw in breakneck rail riding sections and it’s like a living Dreamworks cartoon, to the point it’s a genuine pleasure to explore for extra loot. Plus, I can’t recommend the Crash starter pack enough, especially if you’ve been missing the orange marsupial. His exclusive level is a love letter to the original game, and even has bonus ‘chilli pepper runs’ where you’re chased by a boulder. Sound familiar?

But this is a game that’s made to sell more toys, and on the sales front, it’s sometimes overwhelming. Crystals are found in the Imaginite chest section of your menu, and once you’ve run out of your gift chests, you’re immediately faced with a store to buy more chests with very real money. While it’s good that there’s no special items locked behind the paywall, and crystals are randomised, there’s still an enticing, slot machine aspect that’s a little too addictive for comfort.

While all your original Skylanders characters will work in the game - and there’s a race section to relive the joys of last year’s Superchargers - this is all about the Senseis. To unlock the hidden realms and all that loot, you’ll need to shell out on individual figures. Plus, if you want a non-fire element Imaginator, it’s off to the shop you go for a new crystal. In Activision’s defence though, this is literally what the game is made for, and there’s hours of fun to be had in the main game. Skylanders: Imaginators  is a surprising delight. I think I’ll go back to my Hunter eventually, but for now, Pringle needs some new gauntlets.

Skylanders Imaginators is rich with customisation options, and a genuine sense of fun makes this a brilliant addition to the series.