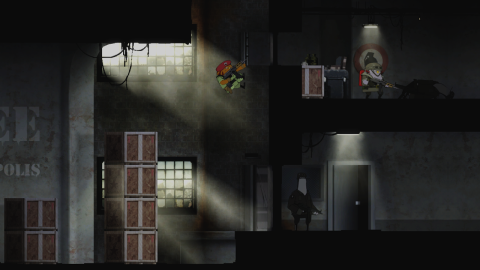 Turning heads on the show floor at both the Independent Games Festival and Comic-Con 2011, Rocketbird has certainly come a long way from its humble beginnings. The 2D run-and-gun sidescroller impressed enough of the right people to get an exclusive launch on PSN. With this latest iteration entitled Rocketbirds: Hardboiled Chicken, fans of the original flash-game get to enjoy highly enhanced visuals, much sharper gunplay, an expanded soundtrack and support for stereoscopic 3D.

The scene is Albatropolis and you are Hardboiled – a commando chicken who looks like the love child of Sly Stallone and Foghorn Leghorn. An ultra-totalitarian regime of penguins has moved in to ruin everybody’s fun and its Hardboiled’s job to single-handedly put penguins back on the endangered species list. If you can recall the plot of any B action movie from the 80’s, you’ve got the story of Rocketbirds.

First off, we’d just like to say that this is one of the most visually arresting downloadable titles we’ve seen since Limbo. Every environment is beautifully detailed and character animations are slick and fluid. Every screen has an axis-rotation effect that lends itself well to the 3D visuals. Also, the game’s indie hard-rock soundtrack is spot on: developer Ratloop signed on indie band New World Revolution for all of the in-game music. While there are some irritating instances where a song runs on a 30-second loop, these occurrences are rare enough that it doesn’t hamper the entire experience.

Just like its flash-game predecessor, Hardboiled Chicken is a 2D side-scrolling shooter with some light puzzle mechanics. Think Shank with a little Rush n’ Attack mixed in for good measure. Players proceed through a series of urban cityscapes, military jungle complexes and industrial environments dispatching enemies with all assortments of firearms and explosives.

For the most part, this formula works well. It’s a ton of fun to move from room to room blowing away countless penguin fascists or to engage in the game’s sparse but incredibly frantic jetpack sections. There’s nothing more exhilarating than destroying your enemies while soaring through the sky like a majestic eagle… err… chicken? Whatever. Jetpacks rock. The major downside is that there are several points in Hardboiled Chicken where the game veers away from the action and forces players into pointless box stacking puzzles or searching for hidden keycards to open locked doors. These frequent breaks in the action serve more to bore than to set up good pacing.

Another real issue with Hardboiled Chicken is that the game is, for the most part, a total cakewalk. Aside from a couple massive spikes in difficulty that feel out of place, there isn’t much the game can throw at you in terms of challenge. This issue is most apparent in the online and local co-op. Designed as a completely different story from Hardboiled’s campaign, players take on the role of little budgie shock-troopers on a series of rescue missions. While it can be fun to play with friends, difficulty becomes non-existent as the computer is simply not equipped to deal with the onslaught of 2-4 players.

Above: This stage could use more jetpacks

While Hardboiled Chicken loses out on some fundamentals, it does get a fair bit right. Best enjoyed in bite-sized chunks, players can find a lot to enjoy if they’re simply looking for something to pick up and play. If you’re a fan of side-scrolling shooters and have a weekend to spare, Rocketbirds: Hardboiled Chicken may be just what you’re looking for.