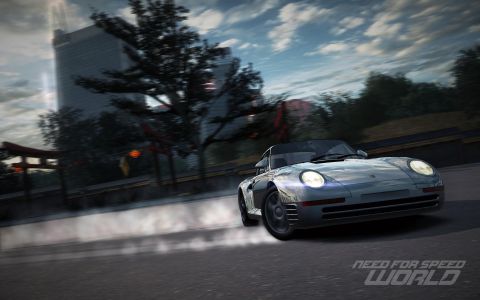 MMO is a term that gets bandied around a lot lately (and one that%26rsquo;s a little annoying, because a %26ldquo;Massively Multiplayer Online%26rdquo; is not a thing you can play). Games that once upon a time would%26rsquo;ve been plainly referred to as online shooters or online racers have picked up the MMO moniker as a way to imply a vast field of content that in many cases may not actually exist.

Need for Speed World is one of those cases.

The premise is strong: get thousands of racing fans together in a massive environment and let them run around, engage in events, and generally tear up a sprawling city. Where Need for Speed World falls short is in its lack of diversity. The game comes across as a fairly feature-light online component of a typical retail racing game, and the world (which, to EAs credit, is pretty large) feels kind of empty, even when populated by hundreds of other racers.

There are two main action components to the game: racing, and pursuit. The first is pretty self explanatory, and as of this review there are only two types of races on offer: standard start-to-finish sprints and lap-based circuit races. The tracks are fairly standard urban settings for the most part, and the AI in single-player races is about as challenging as we%26rsquo;ve come to expect from the Need for Speed franchise (which is to say, not very challenging).

Pursuit mode is a little more interesting - though Need for Speed veterans will immediately recognize it from previous iterations. Smack the fuzz with your little blinged-out speedster and they%26rsquo;ll chase you relentlessly through the city, plowing through civilian vehicles (the cops, as in so many games of this type, are the worst murderers on the streets) and trying to ensnare you with road blocks and spike strips. The longer you survive and the more cash you drain out of state coffers (by wrecking police cars and racking up property damage), the more experience and money you%26rsquo;re rewarded with when you finally escape. It%26rsquo;s a fun diversion, and probably the most entertaining feature in the game, but after a handful of white-knuckle escapes the novelty wears off and pursuit wears thin.

As with most games that make the MMO claim, NFSW includes persistent leveling for your driver. Win races, dodge the 5-0, and you%26rsquo;ll earn rep and cash for increasing your level and buying and customizing cars. Level up and you%26rsquo;ll unlock new races and skill points you can apply to three talent trees, giving your racer the ability to sustain nitrous boosts longer or shorten the cooldown on the game%26rsquo;s fairly robust selection of power-ups (earned as rewards from races or bought with real cash in the NFSW store). Though the persistence is a good hook to keep players racing over the long term, the driver skill upgrades are so incremental and so carefully doled out that you don%26rsquo;t really feel like you%26rsquo;re getting much faster or more dangerous on the track.

The meaningful upgrades, which also unlock as a function of the leveling system, are the ones you apply to your car at your Safehouse. Reach certain level thresholds and you%26rsquo;ll get access to performance packages and hot new vehicles - both of which give you an immediate sense of improvement. Because it%26rsquo;s a Need for Speed game, the aesthetic options for tricking out your ride are deep and satisfying, and the system for applying them is slick and intuitive.

There%26rsquo;s a short list of social elements in the game, but none of them are particularly interesting. Other than chatting with people, adding them to friends lists, and challenging them to races on the pre-made event tracks there%26rsquo;s not a lot of compelling content here, nor is there much incentive to build a posse or race against friends when it%26rsquo;s essentially the same experience as racing strangers.

Don%26rsquo;t get us wrong: Need for Speed World is a competent arcade racing game made by people that know a thing or two about making just those kinds of games. It%26rsquo;s pretty enough, the racing mechanics are solid and fun, and if you can get past the frustrating hang-ups of waiting around for events (which you%26rsquo;ll frequently get booted from because of connection issues), racing against people online can be really entertaining. The problem is that it%26rsquo;s all very rote, all content we%26rsquo;ve played before in better games, and all the promise seeded in that term, MMO, goes unfulfilled.