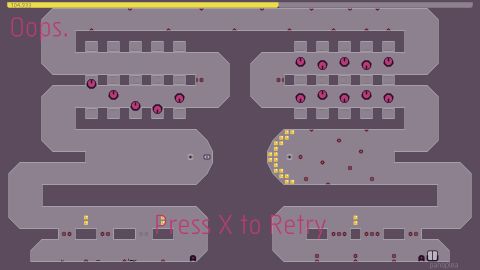 N++ is a stylish upgrade over its predecessors that retains the addictive-as-hell gameplay and adds a vast amount of levels.

It’s attempt 73 of Cheap Thrills. I’ve learnt through multiple runs and careful studying of replays how to grab the final bit of gold on the level, the one that taunted me throughout the past 72 tries. Muscle memory kicks in and with a few well-timed jumps, I’m pretty much there. Then I’m shot. Again. It’s the !$#%@^# turret that’s positioned right behind it, an unrelenting nemesis in the face of my feeble platforming. A few muttered, salty words out of the way, I move onto attempt 74, quickly followed by 75, 76 and... oh, look it’s 1:45am. It is a gigantic understatement to say N++ has a way of getting under your skin.

The mega hard platforming series has always been capable of getting into my head and gently whispering “Go on, have another crack at it, you’ll nail it this time” and N++ stays very true to the series formula. Use the momentum of the stick ninja to gather gold, avoid enemies and escape the room you’re stuck in. It’s platforming boiled down to the very basics - you only use X to jump and the left stick to move - but the focus on building momentum so you soar through levels gets it’s hooks into you faster than the illegitimate love-child of Sonic and Usain Bolt. The movement feels the tiniest bit weightier compared to N+ and gives returning players a valuable bit more control, but at it’s core, N++’s platforming is pretty much the same as it’s ever been.

Considering not much has changed since the flash game back in 2004, N++ has some inspired level design that finds constant variations in the formula to keep things interesting. Every level manages to find new ways to push your ability. Maybe it’s having to navigate the non-explody gaps in a literal minefield, using the new velocity boost to fling across levels, or good ol’ fashioned dodging the crosshairs of a laser turret. The constant experimentation and styles of play you have to adopt just never gets dull, even though the aim is always the same: get out of the room you’re in.

N++ has sacked off playing online and replaced it with offline multiplayer. Yes, the year is 2015 and no, this isn’t a hallucination. There’s co-op multiplayer, but the real fun is in Race, where up to four people can destroy their friendship in a dash through specifically designed levels. Should the assembled racers not be very good, the game mockingly turns on You Suck mode, making itself easier until someone drags themselves over the finishing line. Demoralising, but still better than having a 12 year old jib you offline online.

This isn’t some lazy sequel, it’s just that Metanet has been very careful in its additions to the gameplay. The highlight of which are the ninja ghosts who, when activated, follow your movements until they’ve caught you and consumed your soul. You’ll learn to quickly dread the sight of that damn ghost ninja very quickly. As every fresh feature gets introduced - from the mine switches to the floating deathball - they always feels like a natural part of the game.

If the core formula hasn’t been massively shaken up, then at least the game makes up for it with an endless supply of levels. The standard solo mode has 1125 (!) stages, to be exact. What’s remarkable is that it never feels overwhelming and the quality rarely dips, each episode, a group of 5 levels, only takes on average 5-10 minutes and you can easily skip between them should a level present a clear and present danger to your blood pressure. Add on the ability to create and download user-generated stages and that sound you just heard was the rest of your free time being sucked away.

It’s not just the biggest the series has been, it’s also the prettiest. Like the nerd who ends up being hot in every teen movie ever, N++ has shed itself of the comparatively dorky style of N+ into something that’s crisp and clinical, while giving you the opportunity to choose your own colour palette - avoid Hot though, it looks like a neon billboard vomited up the screen. It’s also slyly funny, mixing chuckle worthy level names like The Legend Of Gold On That One Level with an options menu that is teeming with easter eggs. It’s the mix of eye-pleasing design and subtle bursts of humour that leave just as strong an impression as the platforming.

It’s a shame the audio doesn’t quite match up to the visuals. While there is enough to love on the soundtrack, it’s missing the same obsessive attention to detail that the rest of the game has clearly received, so the ratio of boss to dross - 65:35, if you were wondering - isn’t as strong as it should have been. Also, while the nit picking comb is out, it’s frustrating that you only unlock the levels you finish in an episode, forcing you to replay the entire section again should you ended up quitting out.

While the core gameplay hasn’t changed enough to convert anyone who has never enjoyed the series, N++ is undoubtedly the best version you can get. Everything from the core gameplay to the menus as well as the wry humour has been improved and refined. It’s hardcore platforming excellence... just try not to swear too much when you die for the 100th time going after that piece of gold.

N++ is a stylish upgrade over its predecessors that retains the addictive-as-hell gameplay and adds a vast amount of levels.