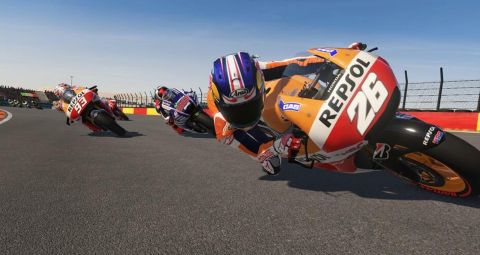 It takes a special kind of madness to sit astride what basically amounts to a two-wheeled rocket and then attempt to navigate a race track with approximately a credit card’s worth of rubber in contact with the road at any one time. Predictably, when you’re experiencing a simulation of this madness on PlayStation 4, you're going to fall off an awful lot. But that means the game is all about trying to maintain control--and that actually makes for a much more engrossing game than you might expect.

The game takes a lot of cues from Codemasters’ F1 series, with near-identical pre-race pit scenes that act as menus, and the option to skip straight to a flying lap if you want to get on with it. Similarly, your progress is monitored via emails and virtual websites inside your motorhome, the quality and size of which increases as you progress through your career.

On the track, the racing may be too delicate to be truly action-packed, but the feeling of reeling in an opponent and picking your moment to pass is deliciously methodical. It’s far from one-note, too, as the three tiers (Moto3, Moto2 and MotoGP) have noticeable differences in feel which affects how you have to ride. The slower Moto3 series that kicks off your career mode is a great way to introduce you to the game because everything feels very deliberate and you’re not constantly having to consciously restrain phenomenal power under your throttle finger.

The optional assists also make a massive difference to how the game plays. While smashing into other riders will always end in a fall, the fine balance of grip under acceleration is much easier to maintain when you have the TCS switched on. But if you dare to lower the setting, or even turn it off, you’re rewarded with an incredibly complex yet enjoyable simulation of riding a superbike.

Indeed, the control layout makes controlling these beasts entirely possible. ‘Tucking in’ down the straight may not be new, but nonetheless, it still feels wonderful as you hold Triangle to get down low, while using the rest of your thumb to shift upwards through the gears. It just feels ‘right’.

Your bike can be upgraded in key areas through research (again, just like F1), although here you only have to complete one lap in a single session to unlock a research point to be spent on research for a specific aspect of your bike’s handling. It feels a little too simplistic, but it’s good to have some reward for putting the time in.

Yet again, echoing F1’s Champions mode, MotoGP 14 features a challenge mode that lets you recreate, or rewrite, history by completing bite-sized challenges that borrow from the sport’s past. There’s even some Rainey vs Schwantz action, which is bound to get some fans extremely excited.

There’s so much content in here, it certainly suits a solo racer, but if you do have a fellow fan in the house with you, the split-screen is excellent, maintaining the graphical fidelity and feeling just like the single-player in terms of how it drives (er… rides?).

All of the above is extremely positive, but there is one metaphorical fly on this game’s visor. The graphics may well be sensational in ultra-slow motion replays, and beautifully pin-sharp while you’re playing, but there is an undeniable air of sterility to the race day action. The crowds are mostly flat and don’t animate and the textures are far too clean and computer-simmy to fool the eye into thinking it’s looking at real life. And even though it’s on PS4, the overall look and atmosphere of the game is less immersive than the likes of GRID Autosport, which is running on last-gen hardware.

If you can cope with the slightly sterile nature of the environments and the likelihood that you will spend a lot of time falling off the bike and hitting restart, you’ll find a lot here to like. It’s an incredibly detailed and exhaustive representation of the sport--indeed, one of the finest uses of a license this side of NBA 2K14. That said, the leap to next-gen hasn’t dramatically improved the core experience, and it feels underwhelming compared to its peers, including Gran Turismo 6 and even Forza 5.