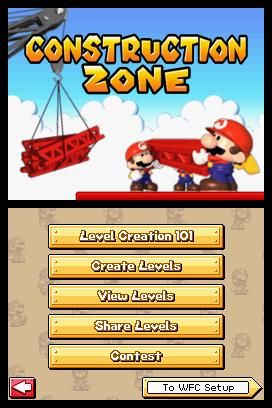 An important thing to learn as a reviewer is to review the game you have, not what you want it to be. Despite Mario vs Donkey Kong: Mini-Land Mayhem being the third game in the series to be on the DS, we still hoped it would be a spiritual sequel to the arcade classic Donkey Kong, with Mario jumping his way through devilish platforming puzzles. Instead we%26rsquo;re given more of the same puzzle adventures featuring Mario and his tiny doppelgangers, but when we got used to that idea, it wasn%26rsquo;t so bad after all.

The set-up is pretty much the same as previous entries, as Mini-Land Mayhem begins with the confused ape Donkey Kong getting pissed about not getting some toy, which leads him to kidnapping Mario%26rsquo;s special friend Pauline. Instead of Mario taking on the gorilla himself, he sets loose his army of wind-up toys to save the day. The Mini-Marios only walk in straight lines, so the player needs to guide them through obstacles through their journey.

As we began it was a little too easy. A stage starts with the Minis on one side and the door on the other. Once you start them going, they keep walking and you use the familiar red girders of the arcade original to make a path for them towards the door using only the touch screen. The Minis march at a leisurely pace, so it%26rsquo;s not too much of a rush to set up the paths, but it does take some quick thinking to make sure all the little guys make it safely to the exit. The whole adventure is helped along by a great soundtrack filled with classic Mario songs that have been redone.

Fortunately MvDK:MM (that%26rsquo;s not too complicated, huh?) is more diverse than just setting up girders, with new enemies, items, even different Minis entering the mix at a steady rate. Soon enough some very quick stylus reflexes are needed, with some quick switching back and forth between tools to securely get the Marios where they needed to be. After the rather simple beginning, we were pleasantly surprised to see how much more complex the game had become without us noticing.

In spite of that, it never really felt challenging enough. First off, up until some pretty late puzzles, every area just felt really small, cramped even. If all you wanted was to beat the level, skipping all the collectible coins, cards and other items, the path was pretty clear. In fact, we picked up all the items in virtually every stage just to keep things interesting, though even that felt too simple most of the time.

On top of that, even with the later complexity, it often felt too shallow for a retail game. And when we reached the end of the normal game and its 72 levels, we weren%26rsquo;t feeling too great about Mini-Land after such a brief play through. After the credits wrapped, we were pleasantly surprised to see the game keep going with an expert mode opening up. Each level had been remixed with new and more difficult settings, and we finally felt a real challenge in the game. By the time we beat it a second time and got the %26ldquo;real%26rdquo; ending, we were feeling a bit more satisfied.

In the end, Mini-Land Mayhem isn%26rsquo;t that different from the previous games in the series, and those looking for a spiritual Donkey Kong sequel should instead download Super Meat Boy on XBLA. Still, MvDK:MM is a consistently fun time filler that keeps the series%26rsquo; above-average quality streak alive. It may not be the best Mario or Donkey Kong game this year, but out of the few big DS releases this holiday, it%26rsquo;s one of the better ones.