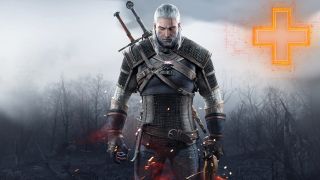 We're celebrating the end of an incredible decade for games, movies, and TV shows. The Witcher 3 is one of the games that defined the last 10 years of play, placing 2nd in our 100 best games of the decade rankings.

In the opening of The Witcher 3: Wild Hunt we join the witcher himself, Geralt of Rivia, relaxing in a bathtub – a scene so iconic it should have its own entry in our end of decade rankings. As he submerges his scarred body in the water, Geralt is joined by what appears to be a hissing lobster. When Geralt notices, he throws the creature out and it disappears in a puff of smoke. It was all an illusion.

These first few moments of the game set the tone perfectly. Not only as an amuse-bouche for all of the nudity that we will see at flashpoints throughout the campaign, but because much like the books on which the games were based, the world of The Witcher 3 is dark and twisted – things are never quite as the seem.

Wanderin' in a Witcher's wonderland

One mission might begin with you investigating a statue that the local peasants have claimed is the 'Allgod' – a simple enough task – but by the end of it you'll be face-to-face with a large beast expectorating a thick Yorkshire accent, feigning omnipotence in order to get free gifts. Another has you investigating the disappearance of a young woman, although it quickly spirals out of control as you find yourself caught in the middle of a love triangle between a werewolf and two sisters. These are just two sidequests of the hundreds available.

That surprise factor is all the more impressive considering that The Witcher 3 arrived into an industry overpopulated with open world games, yet it managed to set the bar for what the genre could, and should, achieve. CD Projekt Red made sure minor characters were just as fleshed out as the major ones, that side missions were just as intriguing as those part of the main campaign, and that every corner of this world has the same attention to detail.

From the stoned grandeur of Kaer Morhen, built into the side of a mountain, to Redania, where downtrodden residents live in fear of both monsters and men, cowering in dilapidated shacks. Many areas are shrouded in mist and mystery, making fast travel an almost forgotten feature, as riding Roach across the map, fighting monsters and aiding strangers is all part of the joy of immersing yourself into The Continent.

Despite this world feeling like it's own living, breathing entity, it would be nothing without its main characters. Geralt is a wise yet weary protagonist with a clearly defined moral compass and a dry wit that endears him to the player despite a cold, rugged exterior. He's a knowledgeable Witcher, too, exhibiting unmatched confidence under pressure, as mirrored in-game once you begin to master the arts of sign casting and parrying. Regardless of whether this is the first time you're meeting Yennefer, Triss, Ciri, and the rest of the gang, The Witcher quickly gets you caring about all of them.

The way in which the game presents the main mission of finding Ciri has you warming to her almost instantly, and playing as this equally accomplished fighter is a breath of fresh air for combat. You see how much she means to Geralt and Yenn, and you become just as desperate to find her as they are. As the search goes on, you learn more about each character, and the way the game brings them all together for the final act is masterful.

The Witcher 3 is an unforgettable mix of fantastical storytelling, thrilling combat, intriguing characters and utterly mesmerising world building. It lives behind a smokescreen, where the real monsters are revealed to be the humans (and sometimes vice versa), the most picturesque landscapes hold the darkest secrets, and seemingly innocuous innkeepers are some of the most infuriatingly difficult Gwent opponents you will ever come across. It’s a game that surprises and enthrals in all ways but one; no-one's surprised that The Witcher 3 is a game that defined the decade.