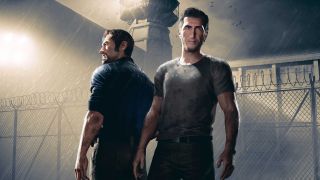 You might have seen Hazelight's next game, A Way Out. It's a co-op focused game about a prison break and, so far, that's about all we know about it. But we do have Brothers: A Tale of Two Sons, the studio's previous game, to give us some idea what to expect.

Let’s pause for a quick history lesson. Brothers was originally released in August 2013 as an Xbox Live Arcade title (ahh, the good old days) and it was received pretty well - Official Xbox Magazine gave it a 9. While the focus was on an innovative twin stick control system that let you play the two main characters at once in single player, there was a co-op mode. That seems to be the direction Hazelight has taken A Way Out in, and replaying the previous game gives us insight in to the studio's story telling ability in a co-op, puzzle solving adventure.

Today, Brothers is available as part of the Xbox One Game Pass, meaning that you could sign up for a two-week free trial of it and play the whole game without spending a penny. So how's it play?

The game is explicitly story-driven, but there are no subtitles, narration, or a line of English to be found. Like Inside, the game communicates the story visually, sometimes with subtle movements, and sometimes with overstated gestures to point you in the right direction. The characters do speak, but their language is nonsense – the only words you’ll start to recognise are the names of the two brothers, Naia and Naiee (told you, total nonsense). But somehow, it works.

For me, this was because of the pace that the game moved. Frantic, action-packed sections that have you sprinting to a checkpoint or desperately climbing are few and far between – mostly things are sedate, and more about puzzles and the world around you than anything else. But the game never rests for too long on one idea, or drags an idea out more than it should. Each area gives you something new to play with, a new mechanic or ability; you use it for a while, and then you move on. Maybe you’re leaping crevasses on mountain goats, or swinging between hand-holds, or helping a troll to escape by stealing a key... whatever it is, you’ll do it for a few minutes, and probably won’t come back to it again. Every level feels like a new idea; it’s really refreshing.

There are some real highlights, which I won’t spoil for you here. What I will say is that there are benches dotted through this game world (who the hell is building a bench on top of a mountain?) that let you have a sit down and enjoy the scenery. Do it. Usually it has no purpose at all, but it’s worth it just for the moment of quiet to admire the world design. At least once, sitting on a bench will unlock an achievement, but I won’t tell you which one because it’s more fun to find out on your own. In fact, it’s worth mentioning that it’s a really easy 1000G on Xbox One – you can get all 12 achievements in your first run-through if you want, or scoop up any you missed with the chapter selection tool later.

I won’t remember Brothers for the 1000G, though. I won’t remember it for the slightly awkward dual-stick controls that at times confused me and had the brothers running in opposite directions (okay, maybe I will a bit). What I’ll really remember is the story and the world, both of which kept surprising me. Until playing Brothers, I wasn’t too interested in the multiplayer prison-break story of A Way Out. Now I can’t wait.