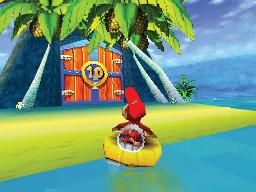 There are so many lame Mario Kart knockoffs these days. They should just band together and form their own bland-vanilla genre and be done with it. You know, just leave the one true kart racer alone and admit they'll never, ever achieve that same level of racing perfection. But Diddy Kong Racing wants so damn hard to be the next Mario Kart that it hurts our eyes to play it for long periods of time. The racing itself is totally fine (if a little slow), but this simple pleasure is smothered in monotonous collecting and mindless wandering.

Wait - collecting and wandering? Yes, Diddy does in fact combine racing with adventure. Just like a typical adventure game (Mario 64, Banjo Kazooie etc) the goal is to visit each world, collect a boatload of cogs, coins, keys, amulets, medallions and blah blah blah to advance. Instead of running from place to place, you drive in kart, plane or hovercraft. Finishing first in every race lets you go against a boss, which, in our eyes, should be the end of that particular world.

But no. After placing first (and you have to place first) and winning against the boss, you "get" to race through the levels again, this time on a magic carpet. The goal now is to tap as many balloons as you can from a first-person perspective as the carpet flies itself around the track. Then, once you beat these levels, you race the boss again, then race all the racks back-to-back circuit style, and then race the boss again using nothing but the stylus. Sweet merciful crap Rare, what's with your raging boner for collecting balloons?