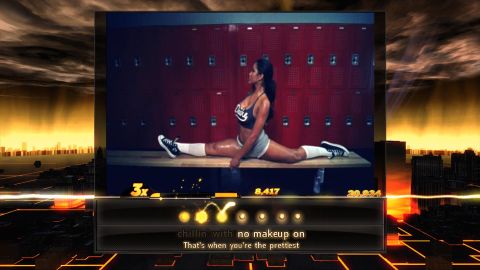 Any person who claims to be a Hip Hop fan can tell you how they know all the lyrics to their favorite songs and can gesticulate the mannerisms of their favorite emcees. Prior to Def Jam Rapstar, our talents were relegated to karaoke bars, car rides with the windows rolled up or the occasional bathroom mirror. Thanks to this game, however, we can firmly place ourselves in the spotlights we’ve ached for for so long. That spotlight would be the warm glow of your television.

As a karaoke game, Def Jam Rapstar fulfills all the requirements and then some. The game does a fairly good job representing some of the major milestones from the 30-odd years that Hip Hop has been around; from Run D.M.C.’s “Run’s House” to Drake’s “Best I Ever Had” there’s a good chance that everyone from the 36-year-old Hip Hop snob neighbor of yours to the 12-year-old swagger-aficionado will find something they’ll want to try. However, you’ll probably notice a surprising lack of heavy-hitters like Jay-Z and Eminem on the playlist, something that I hope will be remedied via DLC in the future.

There are a few things that make Rapstar more than just a karaoke game. One is the use of the actual music videos for each of the songs and the other is the proprietary lyric recognition technology used to determine your score. Since the videos are their unedited versions, some of the older songs will yield pleasant surprises when you see their full clips. However, the small windows that the videos are presented in will make you wish for full-screen versions. While you will probably be too busy keeping up with the lyrics as they scroll across the screen to really watch them, it is definitely a nice touch. Boasting technology that determines if you’re actually saying the lyrics versus mumbling your grocery list raises Rapstar above the average karaoke title. While trying to work my way through Dinco D’s verse from A Tribe Called Quest’s “Scenario” (the one that goes “Ship-shape crushed Grapes Apes that play tapes/Papes make drakes baked for the wakes”) the synapses in my brain started to misfire and my rendition started to sound more like “ship-shape oh crap wait… tapes! Some-drakes baked for… crap!” I was awarded a “Weak Lyrics” score accordingly. Any unfamiliarity with a song’s lyrics generally leads to amusing and frustrating results as you try to follow along.

Above: The scoring screen validates your efforts with your favorite late-90s urban slang

With two players rocking the mics you can either choose from Duet or Battle mode. The former switches verses between you and a friend in co-op style play while the latter is self-explanatory. In Duet mode players are allowed which roles they’d like to play on multiple artist tracks which came in handy when I forced my male friend to take on Mary J. Blige’s part in “You're All I Need/I'll Be There For You” while I did Method Man’s verses.

Even being completely familiar with a song doesn't guarantee complete success while playing Rapstar. Lyrical accuracy, pitch and timing are all used to determine your score and you'll find that just knowing the lyrics front to back isn’t enough. Matching your breathing rhythm with the artist may be one of the bigger challenges as some of the faster-rhyming emcees will have you missing lyrics while you gasp for air. Because this is rated T for Teen all of the swearing and mentions of illicit activity are edited with breaks in the lyrics which can confuse those of us who are more familiar with certain tracks. All of them are edited to their daytime radio versions lyrically. Thankfully, it is impossible to fail out of a song so even stumbling through one you despise just to unlock everything will just be a test of patience rather than skill.

Two features that, while interesting, will probably be underutilized are the game’s video recording and Freestyle modes. 30-second videos can be recorded using your existing console camera and then edited in-game. During play you’ll be able to unlock extras that can be used during video editing; from blingy stickers to Ed Hardy-esque animations. Uploading your video to the Rapstar community allows others to view and rate it thus immortalizing you and your friends’ dip into becoming more like Souljah Boy. Freestyle mode allows you to pick a beat by producers like DJ Premier and Just Blaze and try your hand at spitting original rhymes.

Overall, Def Jam Rapstar is a great introduction to the realm of Hip Hop based karaoke gaming. As a party game, both viewers and participants will be entertained with the song selection and visuals and most, if not all, of the songs are familiar enough with today’s Hip Hop fans to yield entertaining results. The technology incorporated makes the game much more challenging than it looks, and even hardcore Hip Hop fans can appreciate the addition of freestyle modes backed by beats by some of today’s biggest producers. The rather small song list is somewhat disappointing, but at least the range of artists is more than adequate.

Photoshop is my friend!
See comments