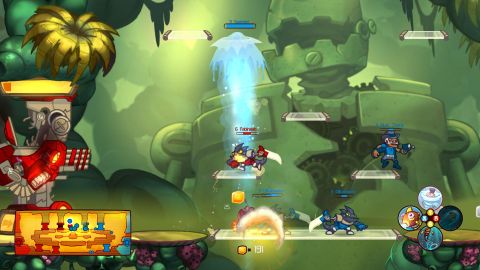 Videogames have no shortage of subgenres, and the multiplayer online battle arena (or MOBA) that has spun off from real-time strategy games are big business right now. Thanks to white-hot games like League of Legends and Super Monday Night Combat and the upcoming Dota 2 (which people can play in beta), there’s no shortage of games – if not a flood – to choose from at this point. But if there's one thing that Awesomenauts taught us, it's that there's plenty of room for vastly different games within the space.

Awesomenauts is a very traditional MOBA title, but stripped down to be as simple as possible. The basic formula is the same here as it is in almost all MOBA games, AI drones are constantly spawning from your base and marching toward your enemy's base, and the enemy is spawning robots of their own. You and your teammates control powerful heroes who try to protect the bots and guide them into the enemy base, while enemy heroes try to stop you and get their bots into your base.

While it shares this formula with other games in the genre, the key difference is simplicity. Your range of abilities isn't nearly as wide as what you see in LoL, and there's no character buffs (like SMNC). It's also a 2D sidescroller, which makes combat much more simple. These might sound like negatives, but the game is actually much better for it. Awesomenauts gets rid of the fat in those other games and distills the MOBA down to its base elements.

The move to 2D is a fantastic decision for two different reasons. For starters, it cuts down on the skill necessary to compete at high levels. There's still room to be a skilled player, but unlike LoL or SMNC, it's unlikely you'll ever get blown away completely by a player who is completely out of your league.

This leads to another great benefit: computer-controlled bots. Since the game is more simple (2D combat is much more simple for AI than 3D) AI bots can populate online matches, and you'll often barely notice they're not human. This helps alleviate one of the worst problems in the MOBA genre; if a player drops out and one team gains a numerical advantage, the game is essentially over. When a player drops out of a match in Awesomenauts, a bot instantly takes their place, and the match continues on. It's better to have an all-human team, but at the very least the AI bots keep your team in the game until a human can fill the slot.

Awesomenauts' other big strength is its roster of characters. It's not particularly large, but each character plays very differently. Also, depending on how you allocate your Solar (in-match currency used for buying upgrades) each character can take vastly different roles. Voltar, for instance, is the game's go-to healer and comes with a standard ranged heal. However, if you buy his flying autonomous drones, he can also be one of the game's best damage dealers (and a nasty surprise for enemies looking to pick off a healer.)