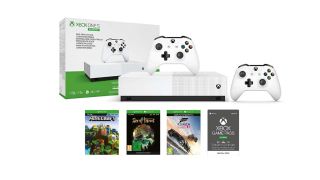 The Amazon Prime Day game deals are in full swing and, with it, you can be sure to expect some swift discounts on a variety of the best Xbox One S bundles around. True to its word, Microsoft has presented some seriously attractive offers with its latest Xbox One S bundle deals, including one for its all new, digital only variant of the eighth generation console.

But first, check this out. You can currently grab a 1TB Xbox One S with The Division 2, Mortal Kombat 11, and an official Chat Headset for just £199 on Amazon UK. That's a saving of 35%/£110 on a bundle which includes two fantastic games, both of which only released a few months ago, and a headset that'll enable you to talk with friends and strangers online when playing them.

Get almost £110 off this tempting Xbox One S bundle, which includes two of the best games of 2019 so farView Deal

Not only that, but Amazon is also selling Microsoft's All-Digital Xbox One S (released earlier this year) alongside an extra controller and 3 months of a Game Pass Ultimate subscription for £169.99.

The All Digital console doesn't include a disc drive, but performs at exactly the same level as its older sibling, while Game Pass Ultimate gives you access to an entire library of the best Xbox One games, including every Xbox One exclusive game as soon as its released, alongside an Xbox Live Gold subscription to let you play online. It's the ultimate package.

You'd be hard pressed to find a better bundle deal on the Xbox One S this side of Black Friday at this point in 2019 so, if you're interested, lap one of these offers up now before stock runs out.

Meanwhile, if you're already a proud Xbox owner, check out our full, regularly updated list of every Xbox One game in the Amazon Prime Day sale right now, which includes discounts on the likes of Red Dead Redemption 2, Call of Duty: Black Ops 4, and many more.