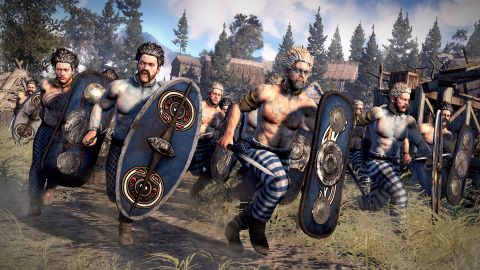 Total War games are released often enough that a new one isn't usually what you'd call an event, but Rome II is a special case. While the series has been consistently great, the original Rome was the breakout model for The Creative Assembly's unique blend of 4X and real-time strategy, and an updated return to the franchise's most apt setting--the classical era--is overdue. Whether you've been keeping up with Total War or not, revisiting the Mediterranean with improved camera controls and richer options for diplomacy is a welcome endeavor. And while it still sports a few usual quirks, Rome II does a great job expanding on the series' massive scope.

The user interface is much sharper and more colorful than it has ever been, but it's also extremely reliant on simple icons over text. Total War veterans will find that the commands for recruiting units, ordering city expansions and so forth are all where they should be, but anyone who's new to the series or must simply reacquaint with the massive array of options may lean heavily on tooltips for the first few hours of play. Thankfully, the mild menu clutter is only really an issue in the world map, where you can take as much time as you need. When engaging enemies, things are kept relatively simple--at least, as simple as a battle involving tens of thousands of soldiers could possibly be.

One of the big draws of the Total War series has, of course, been its often breathtaking scale, and The Creative Assembly continues to find ways to raise the bar in that regard. A decade ago, seeing armies of countless well-rendered soldiers roughing it out across miles of terrain was enough to wow us. Now, battles unfold on both land and sea simultaneously. Transporting units across water is easier than ever, and attacking by sea is now just as viable and exciting an option as striking from land.

Ships are heavier in movement than infantry are, and the dynamic between navies is far more individualized than it used to be, with the actual positioning of each unit playing a vital role in your ability to efficiently fire upon, board, and physically ram enemy vessels. The latter is a slow process, but the sense of accomplishment is great--if there's anything more gratifying than leading a charge that sends an opposing battalion fleeing in terror, it's watching one of your ships smash its hull into an adversary's, sending its crew sinking to the bottom of the ocean.

Because many of the biggest cities on Rome II's world map are accessible from water, you can storm the gates of a settlement with siege weapons while simultaneously invading from the shore. A successful, multipronged attack in Rome II is both invigorating and a stunning sight to behold, particularly if you're running on a PC powerful enough to render everything in the exquisite detail that the game is capable of displaying.

Equally as impressive is Rome II's real-time tactical element. The relatively clean interface masks overwhelming complexity--this is not a series in which you can simply group all of your units together and go on a map-wide raid, at least if you're evenly matched. Winning any battle requires constant attention to unit formations and a keen understanding of how well one type of infantry performs against another. Factors like morale, fatigue, and weather conditions also play a major role in the outcome of any conflict. The tactical segments are easy to control, but there's a lot to pay attention to.

That's only half of the game, though, and the turn-based, empire-building element of Total War has also come a long way since the first Rome. While the interface gives the game an even steeper learning curve, it's also much more intuitive once you actually get the hang of it. You'll particularly appreciate that all of the buildings within a province can be controlled from any city in the area, which speeds up micromanagement considerably once your domain eventually stretches across multiple continents.

Another change is the stance system, which allows armies navigating the world map to automatically raid for resources, stage ambushes, or set up defenses. Battles are never static and are always the result of careful behind-the-scenes planning, which makes for the most unified Total War experience to date. The series has always combined elements of various strategy subgenres into a unique whole, and the blend of economy, diplomacy, and tactics gets smoother with each entry.

Everything affects everything else. Vital war expenses can cripple your finances, poverty can cause civil unrest, and efforts to control both your own people and your enemies--by enslaving captives, spreading religious culture, and establishing trade routes--can impact how the dozens of rival factions in the game perceive you. It's an environment in which a sudden peace offering from a nation you're at war with can be just as exciting as a successful siege against a capital city.

That ambitiousness has always been a selling point for Total War, and with each new entry, the series grows in scope and offers even more options. That also means that it's still an intimidating play, even with Rome II sporting the series' most extensive tutorial to date. It's a game that requires patience and immense commitment. If you know what you're getting into, or are at least patient enough to figure out everything on offer, Rome II is a worthy continuation of the franchise and an overdue update to one of the greatest strategy games of all time. It's every bit as vast and absorbing as you've come to expect.