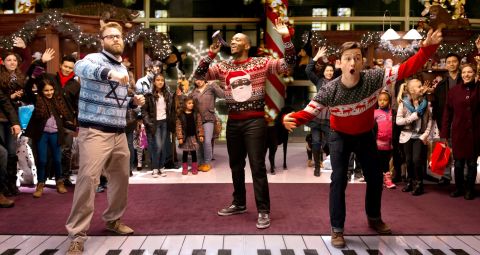 If buddy movies are your thing but Christmas flicks aren't, you'll enjoy this refreshingly edgy romp about three friends lost in the city full of hallucinogens and regrets.

Christmas is just the worst thing going, let's face it. The drained bank accounts, the forced encounters with half-remembered relatives, the awkward office parties... it's all too much. Even worse than the holiday itself are the syrupy, cloying films about Christmas. Yuletide movies are generally as life-affirming as last-minute shopping frenzies on 24 December.

Which is why The Night Before is so refreshing. Yes, it ends on a celebratory note – they all do – but along the way, it properly knocks our intrepid heroes around, dragging them through a druggy night of craziness. The true spirit of Christmas is challenged at every turn – meanwhile, homage is paid to all the festive perennials you can think of, including Die Hard, Home Alone and The Grinch.

The story centres on sadsack Ethan (Joseph Gordon-Levitt), a 30-something basket case unable to move forward after his recent break-up with girlfriend Diana (Lizzy Kaplan). His two best buds Isaac (Seth Rogan) and Chris (Anthony Mackie) have a long-standing tradition of taking Ethan out for a night of boozy hijinks every Christmas Eve, but their busy lives have made it more of a chore every year.

Ethan manages to steal tickets to the most exclusive party in New York, a white whale the trio have been chasing for over a decade. As they stumble through the city's urban wonderland in search of the Nutcracker Ball, attempts are made to mend their strained friendships.

Directed by 50/50's Jonathan Levine, The Night Before is essentially Superbad for the holidays. Funny, cynical, and warm in all the right ways, this could finally be the Christmas movie for people who hate Christmas movies.

If buddy movies are your thing but Christmas flicks aren't, you'll enjoy this refreshingly edgy romp about three friends lost in the city full of hallucinogens and regrets.