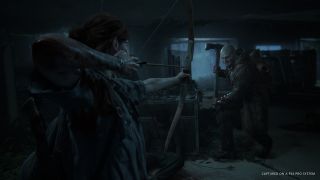 2020 is the year of The Last of Us 2, the PlayStation exclusive we've been waiting for ever since we finished The Last of Us way back in 2013. Focusing on a tougher, older Ellie - rather than her father figure Joel - it looks just as brutal and beautiful as the original, but with a distinctly dark feel.

We've been lucky enough to go hands-on with a large section of the game, getting a taste of the violence Ellie is able to inflict, and the consequences of it, and we've spoken to Naughty Dog writer Halley Gross about the story behind it all.

Big in 2020: The Last of Us 2 will change the way we think about video game violence

The Last of Us 2 delays have been torture, but we're now just months away from the May 29 release date, and the game is looking more exciting than ever. The latest peek - thanks to the game's Deluxe Edition - even hints at horseback combat.

Naughty Dog is suspiciously good at keeping story secrets hidden until the game is in the hands of players, so don't be surprised if there are still some tricks up its sleeves when it comes to Ellie's new life. Thank goodness we don't have to wait too long to find out for ourselves, but until then, here's everything we know about The Last of Us 2.

The Last of Us 2 release date

"I know," director Neil Druckmann wrote on a recent PlayStation blog announcing news of the delay. "It was just about a month ago when we had our big blowout for the game, letting media play over two hours of it along with debuting our new story trailer and revealing the release date... However, it was during the last few weeks, as we were closing out sections of the game, that we realized we simply didn’t have enough time to bring the entire game up to a level of polish we would call Naughty Dog quality."

Read more: The Best Games on PS4 To Play Now

The Last of Us 2 story will focus on Joel and Ellie. But Joel is still (mostly) missing

We haven't seen Joel yet, but we (probably) know he's still around, as the latest E3 gameplay demo makes explicit reference to Ellie's "old man". Still, that doesn't name Joel explicitly, so there's still a chance his presence will be a psychological one rather than a literal one. Naughty Dog does love misdirecting its audience before its big games release.

When discussing the possibility that the game might follow a new cast, director Neil Druckmann has stated that “The Last of Us is about these two characters specifically,” at last year's PlayStation Experience. “‘Part 2’ is saying this is going to be a larger story; it’s going to be a complementary story to the first game, but together, the two combined are going to tell this much larger tale.” So yes, Joel will be a major part of the story. We just don't yet know in what capacity. Joel's daughter, Sarah, was the driving force of the first game, and, well...

Intriguingly, Joel's voice actor Troy Baker recently revealed at a Manchester Comic Con panel that "I don’t think Joel believes he’s a hero. If he was to lean anywhere I think that Joel would consider himself a villain, which is why he can say that he’s been on both sides."

Either way, judging by Druckmann’s comments, this follow-up is going to be much more closely linked to its predecessor than many other triple-A sequels. Seeing as the last game ended on such a wonderfully ambiguous, quasi-cliffhanger, we expect The Last of Us 2 to deal with the lie Joel told Ellie during that emotional epilogue.

Don’t forget, the weathered Texan smuggler basically doomed humanity to extinction when he stopped the Fireflies from performing a lethal operation on Ellie that could have produced a cure for the Cordyceps Brain Infection. Sure, he saved his surrogate daughter’s life, but he also went against her wishes; damning humanity to generations of scratching out an existence against the backdrop of a zombie apocalypse.

Whether or not Ellie bought Joel's lie is currently unknown, but what we do know is that she seems really, really angry - though not without humanity. In the game's first trailer, she states an intent to "Kill every last one of them" (whoever "them" might be), and the E3 2018 trailer intercuts moments of tender friendship and romance with extreme violence on a par with with the graphic horror of French New Extreme cinema. Whatever's going on, Ellie is in an interesting place.

Read more: Days Gone - Everything You Need To Know

As of Sony's E3 2018 presentation, we've now, finally, had an intensive look at some The Last of Us 2 gameplay. And "intensive" is indeed the world. Very much taking its cues from the first game's meaty, improvisational, evasion-driven guerrilla combat, The Last of Us 2 looks to take a somewhat quicker, more nimble approach with Ellie as its protagonist - she can grab bottles and hurl them seamlessly at attackers without breaking a sprint, for instance, and her transitions between various types of cover and combat look a lot slicker than Joel's. That said, the level of graphic violence has clearly gone up.

The Last of Us was no slouch when it came to uncomfortable gore, but the Last of Us 2 gameplay demo is on a whole other level. Following a tender scene of friendship and romance, we starkly cut to Ellie, knife already in a man's throat, gutting him like a fish. It only stays messy from there on out, the violence depicted as hovering somewhere between extravagantly graphic bloodletting and gritty, anatomically realistic unpleasantness. It's nasty, crunchy, choking, gurgling, and wheezing stuff throughout.

Hopefully there's a reason for that. The first game was, after all, a violent game about violence, in which the unglamorous depiction of killing with repercussions formed a great deal of the point. With so little context for Ellie's actions so far, it's hard to know whether The Last of Us 2 is doing something clever here, or just trying to win a 'maturity' arms-race with itself. We'll probably only know for sure when we get hold of the final game.

The Last of Us 2 trailer selection is high on mood and threat, low on context

We've actually now had a few different The Last of Us 2 trailers, yet still, somehow, we have very little idea of what's going on. The first was an ambient piece, reintroducing Joel and Ellie while giving very little detail of the scenario. The second was a sustained, grueling bout of violence, depicting a bunch of characters we don't know, but hinting at a far more tribalized society with at least one murderous cult in its midst.

As of E3 2018 though, we have a proper, focused look at Ellie and her story, told through both cutscene and The Last of Us 2 gameplay. Though you probably watched it on the way to scrolling down here. No, we're still not sure what's going on either.

The Last of Us 2 takes place in Seattle (partly)

Fans had already worked this one out pretty well, but The Last of Us 2 director Neil Druckmann confirmed it at PlayStation Experience 2017: a "large part" of the game will take place in Seattle.

The original began in Boston then went on a journey across the United States as far west as Salt Lake City. When we last saw Joel and Ellie, they'd headed back east a ways to Jackson County in Wyoming, planning to stay at the settlement led by Joel's brother Tommy. We don't know how long that arrangement lasted, but Ellie's clearly done more traveling since then.

Still, that's just a "large part". It seems unlikely that The Last of Us 2 will remain rooted in the Pacific Northwest after how much roving the first game did. Maybe Ellie will make her way down the coast? We don't know if things are as bad on the western seaboard in terms of infection and military oppression. But it wouldn't be much of a survival story if Ellie just traipsed down to Portland and lived happily ever after.

Gross is actually a talented Jack - should that be ‘Jill’(?) of all trades - having also acted in shows as diverse as Comedy Central’s Broad City to Law & Order: Special Victims Unit. It’s not clear if Naughty Dog approached Gross following Westworld’s astronomical success, or if she’s been helping out on The Last of Us 2 for a while. Regardless, it’s super exciting to see a writer who’s penned scripts for the hottest show on the planet get involved with the story of The Last of Us 2.

Gross is actually a talented Jack - should that be ‘Jill’(?) of all trades - having also acted in shows as diverse as Comedy Central’s Broad City to Law & Order: Special Victims Unit. It’s not clear if Naughty Dog approached Gross following Westworld’s astronomical success, or if she’s been helping out on The Last Of Us 2 for a while. Regardless, it’s super exciting to see a writer who’s penned scripts for the hottest show on the planet get involved with the story of The Last Of Us 2.

“Bruce recently decided to take some much deserved time off after shipping two critically acclaimed games in the last few years. He’s looking forward to returning to the studio soon and jumping back in on his next project.”

Whether Druckmann will take on the dual roles of both creative director and game director on The Last of Us 2 is unclear. Perhaps Naughty Dog will bring in a new director to allow Neil to concentrate fully on ensuring this sequel’s script lives up to the impeccable standards set by the original.

Update: Bruce Straley has since left Naughty Dog, so he definitely won't be joining back in on the company's future projects, either.

Read more: Spider-Man PS4 - Everything You Need To Know

Gustavo Santaolalla is the man. Specifically, a man who is very, VERY good at writing music. The Argentine composer won back-to-back Best Original Score Oscars for his work on Brokeback Mountain and Babel, before going on to conduct The Last of Us’ masterfully melancholic soundtrack. Druckmann recently confirmed Santaolalla is returning to compose the music for the Last of Us 2, especially notable as it’s the first time he’s returned for a sequel.

“We’ve been talking about this project for a couple of years,” Druckmann admits at the PlayStation Experience. “He’s never done a sequel to anything he’s done. He’s so prolific and so good. He has these passion projects he just picks and chooses. He doesn’t care about the money. He started writing some new themes for us, and for this trailer you hear some new themes at the beginning, and a new rendition for the original theme at the end.” Buckle up, eardrums. If /that/ giraffe scene is anything to go by, The Last of Us 2 is going to be one of PS4’s most invigorating audio experiences…

Related The Last of Us 2 news

The Last of Us Part 2 has been rated, and it sounds as graphic as you'd expect

Big in 2020: The Last of Us 2 will change the way we think about video game violence

The Last of Us 2 makes you feel like the monster

The Last of Us 2 is "a story about the cycle of violence", says co-writer Halley Gross

Expect more than just The Last of Us 2 news from PlayStation this month, industry insider reports

The Last of Us Part 2 picks back up in Jackson five years later, Naughty Dog confirms

Joel's dead, Ellie's pregnant - The Last of Us 2 theories fans are all arguing over

The Last of Us 2 concept art gives us a glimpse of what's in store. Ellie, what have you done?

The Last of Us 2 stars Ellie as the playable character and is a story about hate: "she's seen some sh*t"