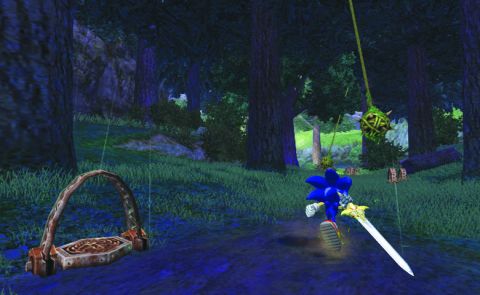 Like most gamers, our relationship with Sonic has been a troubled one. We love the little tyke, but he keeps on disappointing us. He’ll come back with his little blue tail between his legs and we’ll forgive him, only for him to disappoint us again. We never learn. On the 360 and PS3 at least Sonic Unleashed was a step forward, but the Wii version highlighted how incompatible the remote is with a character that moves quicker than Tokyo’s bullet train. This factor derails Sonic’s latest adventure too, along with our hopes that Sonic and the Black Knight would be a worthy successor to the Secret Rings.

The concessions to player control made in Unleashed are largely ignored and most stages can be completed without much effort at all. Simply push forward, wave the remote several times and that’s your lot.

The result is that you barely feel in control of Sonic, but the thing of which you do have control feels even worse. Sonic’s smart-mouthed talking sword should be what sets this title apart from his other adventures, and it does, but for the wrong reasons. The Wiimote isn’t responsive enough and sword attacks feel sluggish. Trying to grasp a high speed character and an ungainly attack system simultaneously proves frustrating.

The result is a stuttery experience that demands you to marry high speed sections with the constant stop/start nature of its combat. That the combat is as shallow as a hedgehog’s bath doesn’t help either. Sonic fans are an obsessive lot, and some may find something to enjoy here. The stages become more interesting as the game progresses and there’s always the throwaway multiplayer to get to grips with. But for those still not convinced by Sonic’s icon status, steer well clear.