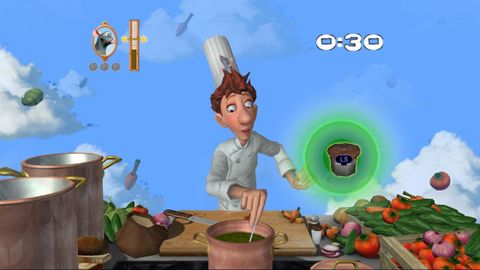 It just wouldn’t be in Disney’s nature to stave off releasing an underdeveloped, ill-conceived waste of time based off a flick starring cutesy animated creatures that’s guaranteed to make truckloads of money. This season’s offender - Ratatouille - actually fares way better on the consoles than it does here in DS-land, where boring level design and simplicity is the name of the game.

The plot’s simple: you’re Remy, a rat with an appreciation for good cuisine and who dreams of cooking. In order to fulfill your dream, you’ll need to hop around sewers, kitchens and rooftops with the help of the disembodied voice of a dead chef… at least, that’s what we think the text-cutscenes alluded to. What this means is that you’ll have to try avoiding “deadly” obstacles while scurrying and wall-jumping to your goal - a blue marker at the end of each level.