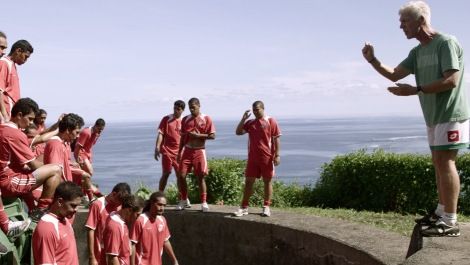 American Movie , Murderball , Searching For Sugar Man … every now and then a small-scale but big-hearted documentary comes along to win our affections and score mainstream success. Next Goal Wins should be the next to get promotion, its good-natured, jocular chronicling of the worst soccer team on the planet sure to appeal to ardent football fans and haters of the beautiful game alike.

Kicking off with a flashback to 2001 as American Samoa lose 31-0 to Australia, it follows the team’s fortunes through the South Pacific Games, where they get trounced in all five games, and then the qualifying campaign for the 2014 World Cup.

Along the way we meet, and come to care about, the players and shouty Dutch coach Thomas Rongen – he’s worked with Johan Cruyff but really looks and sounds like he belongs in Dodgeball (“I would cut off my penis to play in a World Cup qualifying game!” is a typical comment). Star player, though, is transgender defender Jaiyah Saelua, who strides gracefully forwards with the ball like a pony-tailed Alan Hansen. “I’m not a male or female,” says Saelua. “I’m just a soccer player.”

The laughs come hard and fast as we watch players who get tackled by cones in training steadily improve until they win their pride. Hell, they might even win a match if they can just stop puffing cigarettes at half-time. Even better, Next Goal Wins has two halves to its game, buffering the humour by introducing us to the tiny island territory of American Samoa and its religious population.

With most scrabbling to survive after a tsunami hit in 2009, the only escape from the island is to join the military. The footie team at least offers joy and release where little is to be found. OK, so sometimes the backstories all get a little X Factor and there’s one too many shots of glowing sunsets, but it’s churlish to gripe. Next Goal Wins is a winner.

Verdict: A triumph-of-the-underdog documentary so amusing and inspirational you’ll have to Google events to ensure it’s not a mockumentary. Back of the net.