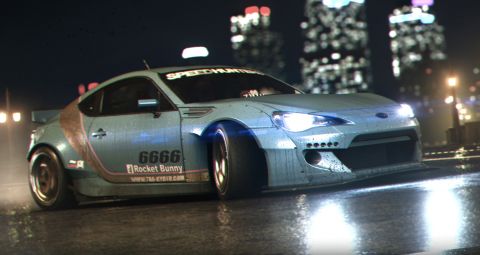 Need for Speed takes driving into a gorgeous world with a modern edge, but its pesky attitude and strict online-only requirement make you yearn for the good old days.

If you’ve been following the Need for Speed series' history, you realize that calling the latest one a ‘reboot’ is more of a formality. The series has so far dabbled in underground street racing, cinematic cross-country sprints, metal-mangling police chases and persistent online worlds (unfortunate note: Need for Speed World stopped persisting a few months ago). There’s usually no guessing where it goes next, and EA’s latest spin just seems to use ‘reboot’ as an evocative lure for players, as if going back to your roots is a guaranteed, unimpeachable path to success. It works in some ways, but this open-world Need for Speed never justifies its back-to-basics pitch, never mind any of its annoying 'features'.

We should start with the painful live-action story sequences, because the game is so obnoxiously front-loaded with them that you’d rather just drive your cute lil’ Mazda MX-5 off a bridge. I know, that sounds grim, but your watery plunge would probably get you some style points from Manu, one of your generi-pals in the game’s fiction. Manu, just like Spike, Amy and a whole gang of white-washed street racers looking for infamy, deliver your mission objectives throughout the game, alongside phrases like “hashtag underground drift riot.” Hashtag who wrote this?

Each member of the gang represents an aspect of Need for Speed racing, split between style, speed, police evasion, car building and driving with teammates - yes, the breakdown is very ‘here is what the survey said people like about Need for Speed’. So, if you feel like racking up points in a skillful drift through rain-slick hairpins, do the mission for Manu. If you feel like doing a regular point-to-point sprint around downtown, hit up Spike.

You’re not bound to story activities - they’re all pulled from events lying in wait all over Ventura Bay - but that doesn’t stop every single person in the gang from pestering you about them on the phone. Relentlessly. The joys of swiftly hanging up on them is countered by the game’s ominous response: “so-and-so will call you back,” like it’s a threat. A better option would be to stop at the garage and beat your phone to death with a tire iron.

You’re encouraged to spend more time with individual cars in Need for Speed. Delve into a list of tire pressure, torque and other minute mechanical adjustments, or use a convenient slider to place your car on a spectrum between grip and drift. Even the overall slider, a godsend for those who don’t want to fiddle with the car’s skeleton, translates to nuanced performance in the world. Somewhere between unflinching four-wheel grip and sideways driving lies the perfect car.

Just about any activity will help raise your reputation level, which unlocks car parts and the events scattered across Ventura Bay, a city of spaghetti highways looped through a rainy, nighttime limbo. Need for Speed is absolutely beautiful in this place, its hazy lighting and reflective tarmac rivers evoking a city lived-in, rained upon and always on the brink of midnight. The hushed roads hide the typical imperfections of a graphics engine well, the dark obscuring pop-in for a grimy, inviting atmosphere.

As beautiful as the geography is, though, it’s hardly memorable, and Ventura Bay’s reliance on freeways to connect distinct neighborhoods turns it into a commute. There’s also the frustrating turnoff of having a frantic race ruined because you’ve just missed, well, a turnoff. Most of the circuits in the game do nothing to create frantic clashes and scrapes among racers, and most fail to exhibit craftsmanship above that of a GPS. Los Angeles may also be a poor model for suggesting vibrancy and life in a city, lending its sprawl to the Ventura Bay but not its infamous traffic.

OK, but how’s the driving? Well, the answer is 'good' - especially if you like sliding around an insidious bend. Mousy cars like the MX-5 feel nippy in the back of the racing pack, while a Porsche Carrera punches though but can’t be so easily cajoled through a harsh turn. Even if you don’t tweak their handling, certain cars just feel like they’ll swing into a drift without fuss, while others, like some of the modern BMWs, make it even easier to straighten out.

The majority of the game’s challenges are built around drifting - a sensible investment, given how well executed it is, and how satisfying it is to master that in-and-out drift metronome. Even so, you spend maybe 3/4 of the time doing drift-for-points kind of challenges rather than racing, so if drifting isn't your bag, this probably isn't the game for you. Similarly, this isn't a game for crash fetishists. A sudden jolt, maybe a roll followed by neon light quickly flooding the screen… it's over quickly and nowhere near the wreckage spectacle of Most Wanted or Criterion’s best Burnouts.

Since garage space is limited and new rides cost a fortune, you’ll eventually have a concise set of cars suited to both traditional races and events that require masterful drifting. The garage forms the basis of a rewarding rhythm in Need for Speed - take your favorite Beemer out, disturb the nighttime peace with its growling exhaust, return with some money, feed it all to a bigger beast and head out again.

Performance upgrades, which don’t allow for major creativity, are paired with wild and upside-down visual customization. Between unique bumpers, bonnets, decals, paint jobs, spoilers and side skirts, you have every chance of putting your earnings into something that looks personalized. You can also, of course, turn a beautiful Nissan GT-R into a purple, turbo-charged crime that has a big cartoon dog-face on its passenger door and a Plants vs. Zombies logo on the hood. Hashtag... personal branding.

Need for Speed is a little too reserved, sometimes, and its emptiness undermines the potential set forth by its online play. Much like Need for Speed Rivals, your Ventura Bay is populated by a handful of other players, also going about their business. The idea is that your paths may intersect, leading to spontaneous races at the press of a button, with perhaps the police in hot pursuit as well. Everyone’s too spread out and marooned between freeways for this to happen with regularity, though, and the police are easily foiled and feel like an afterthought.

The question, then, is why this Need for Speed is online-only at all. With no clear payoff in view, the other technical problems only feel worse. I experienced a frequent visual and audio stutter in racing, to the detriment of controls, throughout my time with the game. Sometimes I’d load a race and begin facing the wrong way. The game’s opinion on whether a high-speed bump counts as a total car wreck seems to change with the phases of the moon. And if the Need for Speed server goes down, you’re out of the game, even if all you’re doing at the time is watching a cutscene.

Its problems, ironically, are what make this reboot seem especially, painfully modern. Need for Speed takes racing into an open-world with mixed results, tacks on an irritating story and doesn’t justify the fact that it won’t work without an EA server. The driving itself is a strong point, yes, and the meditative pace with which you build cars is a wonderful retreat from how other racers do it, but it’s not enough. A modern Need for Speed shouldn’t be characterized by failing in the same areas as its peers.

Need for Speed takes driving into a gorgeous world with a modern edge, but its pesky attitude and strict online-only requirement make you yearn for the good old days.