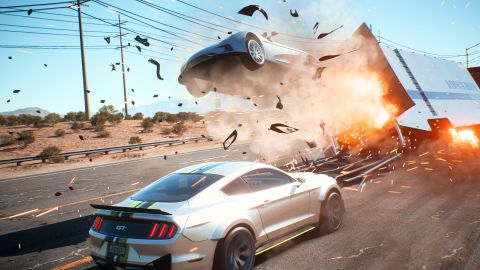 Need for Speed Payback successfully returns to its Fast and Furious roots with aplomb, but a focus on the grind and a beautiful but empty world means it ultimately falls short of greatness.

When I first showed off Need for Speed Payback to the GamesRadar+ crew, oh how they laughed. They took one look at my car - Geoffrey - and fell about. They laughed at his little Brum eyes, his silly wing mirrors, his retro design and said “that’s not Need for Speed”. But in fact, it’s Geoffrey, who happens to be rather brilliant VW Golf GTI Mk1, who absolutely symbolises Need for Speed. It’s not a rags to riches story, no, it’s about sheer determination to win every race despite the odds and a bit of silliness thrown in for good measure.

Need for Speed Payback, as the title suggests, is about vengeance. You play as various members of a crew - all, handily, with different driving styles - who get double crossed during a heist in the opening scenes. You’re left without any flashy rides, not much cash in your pocket and a whole lot of rage. Thus a plan to exact revenge on the ones that betrayed them is put in place, but that plan also brings them up against a major criminal syndicate known as the House.

A huge world with plenty to do

In order to get anywhere near the House and your nemesis, you’re going to have to race, taking into account that you’re going to have switch drivers and vehicles for each quest strand. The rage-filled Tyler is your go-to guy for all things speed, including your standard speed-based races and later drag, while Mac is your London geezer ready for more trick-based affairs, including drift races and offroading. Then there’s Jess, who just happens to be an excellent driver with a penchant for European compact and breaking the law. Switching between them as you work your way through the game’s storyline feels like Need for Speed Payback is trying to cross Fast and the Furious with GTA 5, and that’s a good thing.

The activities you’ll discover in Payback’s story are fairly diverse, moving through different quest lines from traditional A-B races with Tyler to drift challenges as Mac. Jess will be involved in timed courier missions and getaways later on, providing quite the rounded offering in terms of driving styles. And that’s just the story. Move away from there and there are various collectibles and world challenges to discover, from clocking speed cameras, achieving high average speeds along particular stretches, smashing through billboards or pulling off sick jumps on strategically positioned ramps - seeing a Land Rover Defender 110 flying over the wing of a 737 will never get old.

How to find all the Derelicts in Need for Speed Payback

Interspersed between your frissons with rival car gangs are high-octane story missions that channel the Need for Speed series’ Fast and Furious roots. Each one is glorious not just to watch but play, whether it’s pelting along the freeway in a souped-up Koenigsegg, getting alongside an 18-wheeler so your partner can climb aboard to free said Koenigsegg, fighting off scores of cops and House goons in a chase, there’s something inherently awesome about Payback’s storyline. I’m the action hero here and the game makes that very clear.

But although there’s plenty to get your teeth into, you’ll quickly find that Need for Speed Payback’s pick up and play ethos comes with a drawback - the grind. And that’s where Geoffrey comes in. It was far easier - and more ridiculous - to stick with my starter car in Need for Speed Payback than it was to upgrade to something more expensive, because money is hard to come by in Payback. You’ll need to buy a new car for each of the racing questlines, despite the fact that it’ll be the same selection of vehicles on offer but with different tuning, and they’re not cheap. Couple that in with the fact that success in the game’s storyline is linked to your car’s level and money becomes as vital as it does in real life.

Fast and... no, just furious

Each race you tackle has a level, and if your car’s not of equal or greater level to that indicator, you’re going to struggle. The only way to level up your ride without having to buy a new one is to use Speed Cards. Every car has six slots, each one representing elements under the hood, including your gearbox and the Need for Speed essential, nitrous. They come with perks that boost stats and the overall level of your car. These can be won at the end of every race and applied straight to your car, or bought from tune-up shops. But with every race earning you around £7,000, and every Speed Card costing upwards of £11,000, levelling up your car for the later stage story quests becomes a serious grind. Simply repeating races isn’t enough, as you won’t have enough cash to splash on a set of Speed Cards to boost your level. Instead, you’ll find yourself repeatedly going back to old races over and over again just so you can get enough cash to progress.

That’s especially true of the drag questline. It’s like I suddenly hit a progression wall at about 120mph and it hurt. Failing the same races over and over despite having equal car level is a literal drag, and so is having to go back and earn more cash to get more Speed Cards in order to have any chance of succeeding. It sucked the fun right out of this otherwise incredibly enjoyable experience - and that was only the beginning of the grind. If you want nice cars - sorry Geoffrey - you’re going to have to put a lot of hours into Need for Speed.

It doesn’t help that while Need for Speed Payback’s world is big, beautiful and enjoys the luxury of constant framerates and a brilliant photo mode, it’s just a bit… lifeless. The fictional Las Vegas-inspired world of Fortune Valley feels very stale and empty. Cops only appear inside story missions, the challengeable roaming racers are equally a little too boisterous and oddly absent, and despite the fact it moves from mountain, to desert, to city, none of it is that memorable. It hasn’t got a patch on the maps of a Forza Horizon game for example. It’s fully functional and great to look at, you just won’t be going for a casual drive around the vast map just to take in the sights.

And that’s a shame because Need for Speed Payback is a game with a brilliant story at its core. Silly, over the top and a little bit self-indulgent, but in a fantastic action movie way. It works and you’ll enjoy every car chase, nitrous boost and quippy millennial line. It just misses the mark by adding RPG elements into an arcade racer and making the best cars always just out of reach.

Don't forget to check out our Need for Speed Payback tips for becoming a better racer.

Need for Speed Payback successfully returns to its Fast and Furious roots with aplomb, but a focus on the grind and a beautiful but empty world means it ultimately falls short of greatness.