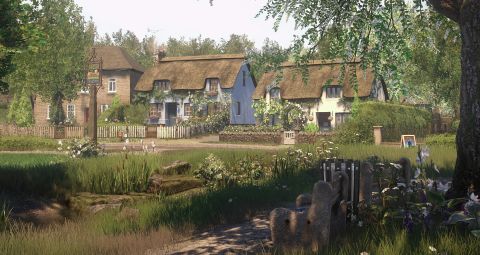 An exceptional story, told via one of the most vivid game worlds around.

There is a run button in The Chinese Room’s cerebral Shropshire-based exploratory story. You won’t need it. The idea here is that you’ll take the time to drink in the world you’re exploring, actively reading the clues ushering you towards always-tempting answers. How did the quaint English village of Yaughton suddenly become apparently empty of life? Why do pint glasses sit empty on beer garden tables or cigarettes lie still-smoking in ashtrays? And what are all these blood-stained tissues we see littering the living rooms of the ex-residents’ houses?

Despite not physically meeting the people who called the place home, you’ll get to know them intimately through your meticulous exploration. And these characters are so enrapturing, you won’t want to risk missing anything by rushing. If you happen to be British, the first thing that’ll strike you as you crest over the rise and step into the village proper, is just how familiar it feels. I'm writing this review having spent the best part of my youth grappling with the ’80s (yes, ok I'm that old). Anyone with a similar glam rock-stained past will instantly grasp onto the long-thought-lost physical elements of that era which have made their way into Rapture’s world.

There are the obvious things, such as red phone boxes and letter boxes. And then there are the seeping, admirably detailed touches. The local pub has a smoky haze to it, long since absent in even the most dingy of today’s drinking pits. The local garage sells those propane gas canisters which used to be so much more common before we realised how dangerous indoor gas heaters could be. Even the phones you come across while rifling through people’s houses are chunky, finger-trapping rotary models.

Immediately, for us Brits at least, there’s this implacable sense of loss to proceedings. OK, so the ’80s might not have been the best era going (I still haven’t quite forgiven Rick Astley for all the rickrolling), but by cherry-picking these quaint touchstones of long-buried memory, The Chinese Room imbues its players with an imbedded yearning. And this is exactly in line with the general tone of the story…

…which I'm not going to touch on at all here. Part of Rapture’s lure is that its narrative is told in part by the player. As you explore Yaughton and the picturesque neighbouring countryside, you’re guided loosely around by a floating, shining ball. Exploring areas, whether you’re following this glowing sphere or not, reveals snippets of stories. The residents of the village may have long since departed, but left behind are light-based shadows, depicting the events that may or may not have led to their…well…to what happened afterwards.

If that sounds coy, it’s because I really do not under any circumstances want to spoil anything. The characters whose stories you uncover are incredibly well put together. From the dialogue, which is never anything less than captivating, through to the voice acting which – and I'm totally going there – is the best I’ve yet heard in gaming. There are scenes which will take your breath away, dripping with drama and nary a whiff of pretension. The ways the village’s residents react to the circumstances they find themselves in feel jarringly real. Perhaps it’s the masterful implementation of their faceless ethereal constructs, requiring you to fill in the visual gaps with your own brain and to stop and intently listen to what they are saying, but they actually sound like people. They don’t sound like they’ve been written, or like they’ve been birthed by a directorial hand.

Partly this is down to your own part in the affair. Your role is one of detective, though not in an overt sense. Your faceless, nameless (or are they?) protagonist wanders from place to place, observing, so that you can slot together the pieces of the story yourself. There’s an awful lot of trust involved on the developer’s part. The Chinese Room are asking you to slow down, to observe, and to actively engage with what you’re seeing, not with a button press but with something deeper, a shift in perspective, or a mental knotting together of several story strands.

It says a lot that the one videogame-y element of all of this, the tilting of the sixaxis required to fine tune the occasionally static motes of light that dot the map and demarcate the more momentous story slices, feels jarring and out of place. As too do the rare instances where you come across locked doors or un-jumpable knee-high hedgerows which indicate the edges of the map.

Not that you’ll notice these niggles often. There’s too much to drag your attention back into your own frantic ordering of thoughts about what you’re seeing. Ushering you along throughout is a throbbing orchestral soundtrack, which permeates moments of intense panic as ably as it lets those slower burning scenes hit for all their worth. The sound design is fantastic in numerous other ways, too. A particularly momentous occasion occurs (no spoilers) and the crescendo of sound it blasts your ears with is like a fog horn, crumpling you aurally as you deduce the true horror of a situation unfolding before you.

Apart from a slightly awkward run-in to the finale, which feels oddly linear compared to the rest of the game Rapture never lets up. Each chapter culminates in a guaranteed heart string-twanger, and the build up to each is ominous, intense, and, at times, genuinely harrowing. It’s not about speed, then, but pace, impact, and timing. And there’s an artistry at work behind the placement of things. You might be walking over to have a look at a distant car, its doors open and a bottle of whiskey perched on the boot (that's 'trunk' if you're American), only to realise that this visual carrot was dangled before you just so you could then discover a doctor’s surgery loaded with hidden exposition only the attentive will latch onto.

Everybody’s Gone To The Rapture is brave, it’s challenging, and it’s essential. How The Chinese Room has managed to convey this level of narrative artistry, while simultaneously offering us the freedom to dig through it’s characters’ lives so freely, is beyond me. It has to be experienced to be believed.

Everybody's Gone to the Rapture

An exceptional story, told via one of the most vivid game worlds around.