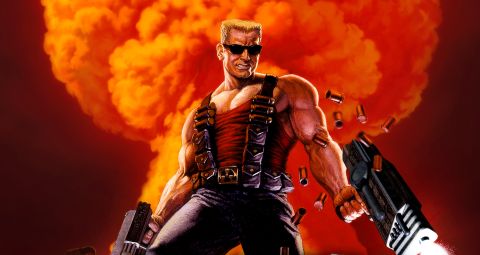 Duke Nukem 3D: Megaton Edition is a mediocre game that is relying on misty-eyed nostalgia for sales, rather than offering a new spin on 18-years-old content.

If you like your heroes big, brainless and sporting a buzz cut so straight it would make a spirit level look off-kilter, then Duke’s your guy. And after almost 20 years, he’s back. Again. He’s aged like a decadent meal after it’s been devoured - all of the ingredients that came together to create something that was once new and innovative have deteriorated and distorted through the bowels of time and emerged as a rather distressing specimen that is more likely to create a bit of a stink than have people queueing up for a closer look. But despite his odious reputation, the Duke resurfaces every few years, and even with the cringe-worthy status he’s accrued, it’s hard to resist indulging in a spot of reminiscing.

Duke Nukem 3D: Megaton Edition for PS3 and PS Vita is essentially the XBLA port from 2008, complete with the rewind time feature, online co-op, leaderboards and the ability to share clips of your antics in both single-player and multiplayer. The graphics have been given a nip and tuck and don’t hold up too badly. Sadly, the same can’t be said of the gameplay.

The brief plot summary is hidden away in the menus, because although it was imperative that our heroes had a reason for a mass murder spree back then, it didn’t need to be a good one and frankly, we didn’t care what it was as long as he had the weapons to carry it out. As I progressed through the levels, I sometimes found myself at a loss, having slaughtered every bottom-feeding, scum-sucking algae eater in sight and having no clue as to what to do next. It’s in those still, vacuous moments, bereft of plot devices to carry the momentum, and the incessantly looping sound track, that the absence of a narrative can really be felt.

It’s easy to wax lyrical about the era of gaming when hand-holding didn’t exist, but some of those games mercilessly sawed your hands off and repeatedly slapped you in the face with them, all the while chanting “Stop hitting yourself!”. Endlessly running around searching for something you missed - a hidden switch here, a crack in a destructible wall there, or a great big Shawshank Redemption-esque tunnel hidden by a pin-up poster - will either drive you to quit, or stoke the fires of your perseverance into a white-hot inferno that’ll have your eyes burning and the wax dribbling out of your ears. And if you succeed, you get to experience it all over again in the next level. Huzzah! I managed to get by on hazy recollections from my first fun back in the 90s, but never having played beyond the first episode, I soon fell into the second camp. That said, the satisfaction when you finally beat those levels brings a damnably gratifying sense of achievement, even if the process of getting there isn’t entirely fun.

We all know what happens when Duke runs out of bubblegum. Record the consequences and share your gameplay with everyone on your friends list with the User Clips feature. Show off your best time trial runs or your prowess with multiplayer. You can even cycle between the players in the clip to get a first-person view of what it’s like to be on the receiving end of one of your own ass whuppings.

Duke Nukem 3D is a game that’s so old it can legally drink in most countries and it’s riddled with all of the problems an FPS approaching the two decade mark would have. I think it’s fair to say that early 3D shooters have aged about as well a pot of week-old yogurt in a greenhouse on a hot day, so the driving force behind sales is likely going to be nostalgia, alongside the novelty value of having it in your library. If you played the original back in the day, this will be like a violent, bloody explosion, propelling you down memory lane atop a warm, fuzzy fireball. If you missed out because you either didn’t exist yet or were too preoccupied with the business of filling up your nappy to be bothered by such trivial pursuits as video games, you’ll recognise it as a landmark title that still has a huge influence on the genre, but probably enjoy it as a fairly mindless shooter that’ll keep you occupied on the go.

Disappointingly, for such basic gameplay, it’s a tad buggy. More than a few times, I was cycling through weapons, only to have them apparently disappear, leaving me brandishing Duke’s flailing leg at hordes of enemies in the hopes that he was cultivating a fungal infection that would have them keel over as soon as they caught a whiff. The multiplayer suffers even more so, with horrendous lag that makes it almost unplayable. Encounters with other players are purely comical, as you strafe and circle each other, wildly firing off shots and hoping that the aim-assist will do the rest, while in the co-op mode, your compatriots only serve to get in the way, obstructing corridors and making the simple task of opening a door close to impossible as you both mash the open/ close button, neither willing to back down. My biggest issue with the multiplayer modes is the inability to turn off the microphone on the PS Vita or mute other players. It’s a massive oversight for a handheld console that I play on the go or when I'm at home with the telly on, and having a bit of a chat at the same time.

The game is free to PS Plus members this month, but the usual price is £7.99, which will get you all four episodes of the single-player campaign and the three expansions. Honestly, this seems a little steep when you can pick up Bulletstorm on PS3 via sites like Amazon for half the price, or Killzone on the PS Vita for a couple of quid more. The addition of the gallery with sketches of assets like character models, fleshed out with a few notes on the development process, is a nice touch, but the entries have to be unlocked.

Duke Nukem 3D: Megaton Edition would feel like much better value if it had been packaged as part of a collection (similar to the Sega Megadrive Collection or Capcom Classics Collection) with immediately available bonus features. As it is, the price (coupled with regurgitated content) makes it a less than desirable alternative to the current offerings in the PSN store. If you get misty-eyed remembering that tight red vest, monotone one-liners ripped from 90s movies and casual sexism shoe-horned into the plot, this one’s for you. If not, leave it in the archives of video game history and move on, happy in the knowledge that Duke will probably be back again in a few years when his supply of bubblegum runs out.

This game was reviewed on PS Vita.

Duke Nukem 3D: Megaton Edition is a mediocre game that is relying on misty-eyed nostalgia for sales, rather than offering a new spin on 18-years-old content.

Shabana Arif
Shabana was born looking like a girl wearing a Pikachu hoodie, so when such things became popular, she fitted right in. She writes guides, reviews and features for GR+ when she isn't screaming at Dark Souls 2 on YouTube.
See comments
Gaming deals, prizes and latest news