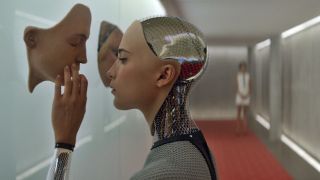 Quantic Dream’s upcoming interactive cinematic game Detroit: Become Human is a tale of the android revolution with plenty of precedents. Channel 4 drama series Humans and the Black Mirror episode Be Right Back spring to mind – as does Ex Machina. But what does Quantic founder David Cage think of the Oscar-winning film? At this year’s E3, we discover it gives him more than a touch of Dave ja vu...

“I thought it was very inspired by Kara!” he reveals to OPM (fresh from our behind-closed-doors demo of his new project). He’s referring, of course, to Quantic’s 2012 PS3 tech demo Kara, the seven-minute tale of a remarkable robotic woman who can feel real emotions and who wants to become human.

It’s the basis of Detroit’s narrative – and, in Cage’s opinion, an obvious influence on Alex Garland’s film. “I think they loved it, for sure. The visual elements, the way they designed their character, what they tried to evoke... It was very close to what we showed.”

But did he enjoy it – and what of that shock ending? “I felt it was... a film,” he shrugs. “I spent a good moment watching it, but I can’t say I was really moved by it. “They did pretty much the opposite of what I wanted to say with Kara, where I was saying that maybe technology could become... alive. And basically, they were saying something that was a little bit darker than what I wanted to say.”

But it’s not like Cage’s Detroit is all sunshine and robo-roses. The story’s set in the near future, when ultra-lifelike, human-serving androids have become so sophisticated that the lines between human and android are blurring. As our cyborg friends start to become overwhelmed by their newfound feels (threatening humans and even committing suicide, we’re told), the city’s thrown into chaos. Scary. Does Cage believe something like this could ever happen for real? “I think that’s likely to happen,” he tells us.

“I was inspired by a book by Ray Kurzweil called Humanity 2.0, where he explains that human intelligence grows very slowly: we’re not much more intelligent than 200 years ago. But machines, if you look at the curve of how they progress and learn, it’s crazy. Who knows if one day they will have emotions? We may be in this strange situation, like in [Detroit], where we’ll have machines that look exactly like us, are more intelligent than us, and maybe feel emotion. How will we deal with them?”

QTEs, mostly. As in Cage’s previous masterworks – PS3’s Heavy Rain and Beyond: Two Souls – player choice is the driving force. Each press of a button leads to huge life-or-death decisions. And yes, androids can die.

In Detroit, you switch between several characters, both android and human. While we haven’t seen returning starlet Kara snuff it in any alternate timelines just yet, we do see android detective Connor die. A successful, self-sacrificial outcome of a hostage situation involves our character getting shot in the back, his body oddly slumping forwards and stopping stiffly as blue blood spurts everywhere.

This from the man who thought Ex Machina was too dark? And he’s explored the dark side of technology before, we remind him. After Norman Jayden’s ARI addiction in Heavy Rain, we wonder whether Cage is excited or nervous about the advent of virtual reality. “Yeah, you’re right to explore that in Heavy Rain with Jayden... No, I’m not scared,” he laughs. “It’s fun to see something that we imagined coming to life.” Hmmm. Ex Machina is one thing – but we’re pretty sure Sony won’t be crediting Cage with PS VR.

But he’s enthusiastic about the new tech, and when we ask if he’s looking forward to working with VR in the future, he responds, “Yeah, absolutely!” One thing’s certain: we’re not holding our breath for him to make an official Ex Machina tie-in.