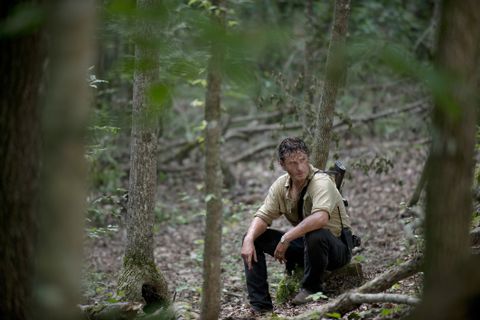 Pity the poor residents of Alexandria. Before Rick Grimes and his crew came along, they seemed to have found a safe space in the apocalypse. And now, just a few months after our gang arrived, everything has gone to hell...

Not that it's Rick's fault. All of this horror would have come anyway. And let's face it, this lot do die very easily. Rick, Carol, Michonne and co are simply doing their best to to help them learn to survive.

Yeah, that worked out just brilliantly, didn't it?

The first half of “Thank You” is very much business as usual. Some nicely John Carpenter-esque music aside, there's a strong sense of déjà vu. This looks and feels like yet another episode where people plod around a generic deserted town. We've seen that many times before in this show. And while it turned out to be a ruse – a nifty way of sneaking in one of the show's biggest body blows – it didn't stop the first half from being anything other than plodding and a teensy bit dull.

Thankfully, things picked up when the group was ambushed by Walkers, and forced to split up. The zombies are an effective menace here, and what initially looked like an episode designed to help us get to know the millions of useless Safe-Zoners turned out, instead, to be a way of thinning the herd even further after last week's attack. I can't imagine there are gonna be many more squabbles about pasta makers after this one.

Of course, faceless cast members dying is nothing new, so to really sell the threat, we had to lose someone we know. It looked like that would be Nicholas. Glenn has taken him under his wing of late and tried to help him, but it was all too much. He shot himself after thanking Glenn for his kindness – and literally dragged his friend down with him into a crowd of zombies, where he appeared to be eaten alive. Bloody hell.

SPOILERS AHEAD FOR THE WALKING DEAD COMIC!

Main character deaths are hard to get right, but this was pretty shocking. There's been a sense that Glenn's time was coming, at least amongst the readers of the comic, but this is an entirely different (though equally cruel) ending. There was no Lucille, no Negan, just a lot of very hungry Walkers. “Pulled apart by zombies” is a classic horror death, but the fact that it's happening to such a well-loved season one survivor made for difficult viewing. That it happens precisely because he has been trying to help Nicholas was a bitter twist.

If he is dead, that is. The Walking Dead doesn't normally do fake outs, but there's a persistent rumour that the apocalypse's most-loved pizza boy may still live. Crucially, the scene is focussed mainly on actor Steven Yeun's face. He's screaming, but there's no sound (some nice direction here from Michael Slovis, incidentally) and it's not impossible that Nicholas's body is on top of him. It looked pretty final to us, but it's also strange that Yeun didn't appear on The Talking Dead afterwards - a tradition for recently deceased characters. For now, let's consider him Schrödinger's Glenn.

That could turn out to be a bit of a problem for the episode retroactively. The death is so powerful and surprising it gives a standard episode a real boost. If it's a con then "Thank You" will be looked at as just another episode where lots of people you didn't know or like got eaten. For now though, thumbs up, and tears. Glenn was a great, loveable character and if this is his last bow, it's a sad day indeed.

Glenn's death is doubly-shocking because his end in the comic book was so different to this. Dragged before the villainous Negan, he's beaten to death with a barbed-wire wrapped baseball bat nicknamed Lucille. It's a shame that Steven Yeun has been deprived of such an iconic scene, but perhaps that will be saved for another character in the show. Daryl, perhaps? Or even Rick?

It wasn't a particularly talky episode, but Michonne got some good material. I enjoyed seeing her tear Heath off a strip and lay it out plainly that, despite everything he's seen, her group has been though a lot worse. At the same time, there's a real vulnerability there. Danai Gurira is a wonderful actor.

Has Rick been bitten?

Rick's hand is injured with a tainted machete. Does that mean he will have to have it amputated? It's not out of the question - Rick in the comics has been rocking the one-hand look ever since the Governor chopped it off, and it's well known that Andrew Lincoln was keen to have it come off too. Then again, it could all be a big tease. It would certainly be an extra strain on the VFX team every week.

“The magic number's 20. That's the mission. Let's make sure they're all munching on infirm raccoons the rest of their undead lives instead of any of us.” Abraham