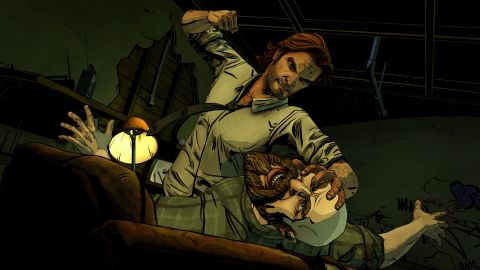 Who's afraid of the big, bad wolf? That's what Telltale Games asks when it puts you in the shoes of Bigby Wolf and tasks you with solving a fairy tale murder. It isn't a rhetorical question; while Bigby carries out his investigation the game keeps asking it over and over again: who fears you? Or better yet, who are you going to make fear you? That question is at the heart of The Wolf Among Us. Between its carefully paced, enthralling story and emotionally intense conclusion, the journey to figure that out is as riveting as the eventual answer.

An episodic prequel to the comic series Fables, The Wolf Among Us is set in the fictional New York City borough of Fabletown, where various mythical characters fled after the invasion of their Homelands. The game kicks off with a murder case that Bigby and Snow White must solve before the killer strikes again. But things aren't so simple. Their investigation sheds light on a dark underworld more extensive than they ever expected, and the deeper they go, the harder their choices--and yours--become. It's very much a game about making decisions: who will you help during your investigative journey? Who will you accuse? Who will you befriend, and who will turn against you? The story does a great job of putting you in control before immediately testing your mettle, and the twists it uses to do that are exciting and often unexpected.

In keeping with the structure of a good mystery, early episodes in the season have a slow burn, building steadily toward the ultimate conclusion without ever giving too much away. Most of the game is spent meticulously pawing through evidence, trying to decipher how it relates to your whodunit. These investigations are punctuated by snatches of intense but technically loose action--Bigby will, for instance, perform the same scripted action regardless of which trigger you hit when a prompt appears. While some might object to the lack of skill involved in progressing through these sequences, they do help break up Wolf’s quieter moments, and are just punchy and exciting enough not feel intrusive.

The action sequences are all smartly realized, each with its own purpose and impact on the story. You will always walk away from one feeling like you've gained hard-won knowledge. Though you occasionally have the freedom to explore and talk to characters as you please, the game will eventually steer you in the right direction when necessary. It's subtle enough that it never feels like your hand is being held, and seeing the "You connected the evidence" message after successfully drawing conclusions from a crime scene is more rewarding than any victory fanfare. Each episode also does a great job of upping the ante with new revelations and heightened stakes, consequences for failure becoming greater at every turn. If that weren’t enough, through it all you have to bear the anxiety of never quite knowing if you've measured up.

Foreseeing the potential of Wolf's branching narrative paths, Telltale had the good sense to include a Rewind feature, which lets you reverse to a critical moment in the story and start a new save from there. This allows you to take full advantage of all the options available to Bigby at any given moment, and see how responding differently might change how things play out. Maybe you regret slapping that father around in front of his son, or just want to see if jerkface Bigby gets better results than his diplomatic counterpart. In addition to satisfying your curiosity, it increases the game's replayability, and you stand to gain a lot of insight from using it even once.

That, odd is it may seem, is one of the most enjoyable parts of The Wolf Among Us: making hard decisions without knowing what the outcome will be. While it would have been easy for the game to get mired down in the sort of contrived, one-sided decision making that so many story-driven titles fall prey to, it keeps things fresh and interesting by keeping its choices ambiguous. The "right" answer to any given question isn't always obvious, such as when choosing between visiting two crime scenes when you know evidence will be destroyed at the second, or picking who to pursue when two perps seem equally guilty.

Some choices are admittedly inconsequential (different dialogue options, for example, can prompt only slight variations in response), and seeing that a trying exchange doesn’t lead anywhere can take the magic out of the experience. Wolf also runs into a common issue for dialogue-wheel games, where there’s sometimes a frustrating discrepancy between the dialogue option you choose and what Bigby actually says. (I didn’t mean to insult you, pig-friend, really!) Still, even the least-juicy conversations are fun, and help mask exchanges that seem unimportant but come back to haunt you in unexpected ways.

The season's final episode, Cry Wolf, is a reward for all that tantalizing, rising tension. Unlike its preceding episodes, it tumbles explosively toward the finish line in a swirl of revelations that together feel like an earned victory. The resolution isn't easy or pain-free, and even when the credits roll the knowledge of whether or not you did the right thing is still frustratingly out of reach. But that's part of the magic, because the conclusion still manages to be satisfying without ending in a hamfisted, binary fashion. The Wolf Among Us doesn't have any easy answers to give, and being able to pull that off well is its greatest triumph.

The Big Bad Wolf of legend, Bigby was recruited as Fabletown's sheriff to keep the peace and maintain order within the community. The other fables haven't forgotten his bloody past though, and many wonder if he's truly changed his ways.

Snow White is the woman behind the curtain in Fabletown, even if Deputy Mayor Crane gets all the credit. Naive but steadfast, Snow is determined to get to the bottom of the Fabletown murders, but can she trust Bigby to follow her orders?

The youngest of the three little pigs, Colin's mostly forgiven Bigby for blowing down his house, but not enough to stop guilt-tripping him. A frequent couch-surfer at Bigby's place, his snarkiness and mooching mask a strong loyalty for his canine compadre.

Toad (The Wind in the Willows)

Once the wealthy owner of Toad Hall in The Wind in the Willows, Mister Toad has had to settle for managing a rundown tenement house in Fabletown. Unable to afford magic to make himself and his son appear human, he's a regular thorn in Bigby's side.

The famously awkward Ichabod Crane is no more charismatic in Fabletown than he was in Sleepy Hollow, and now he has a way worse attitude. The borough's ineffective Deputy Mayor, he's scarcely in the office, leaving the work to Snow while he pursues his own interests.

Buffkin (The Wizard of Oz)

There's no place like home, but with no home to go back to, winged monkey Buffkin has to make do with what he has. Assistant to Snow White in the Fabletown business office, he’s a wiz with ancient information and languages--whenever he’s sober, anyway.

Double trouble is putting it lightly--these brothers of Alice in Wonderland fame always seem to show up in the seediest places under the worst circumstances. Their methods are as mysterious as their employer, and they make a point to keep it that way.

He kissed the girls and made them cry in his nursery rhyme, and life hasn't changed much for George Porgie since then. The owner of a seedy nightclub called The Pudding and Pie, this salty jerk always has something to say, and a creative way to swear it.

Disney's Little Mermaid might have found her happiness, but Fabletown's version, Nerissa, isn't so lucky. With no family and no prince, she takes a job at Georgie's club to make ends meet.

A horror from the depths of urban legend, Bloody Mary spreads terror throughout Fabletown, appearing when and where she's needed to keep business interests secure. You could say she's a professional scarer--but honestly, she'd probably do it for free.

For all the decisions you make during the story, the physical events that end The Wolf Among Us don't change much. One or two characters swap places, and dialogue options are slightly different, but overall the sequence of events is about the same. Some might say that means your choices are inconsequential and there was no point--but that's not really what the game's about. Telltale stressed from the beginning that this is your story, and it is: it's the story of your Bigby Wolf and who he has become by the time the curtain falls. Whether he's really a changed wolf, and whether he confronts the finale negotiating or snarling, is the ultimate result of your choices. You're asked at the beginning, and you're asked at the end: who's afraid of the big, bad wolf? Nobody can answer that for you. You'll have to find out on your own.