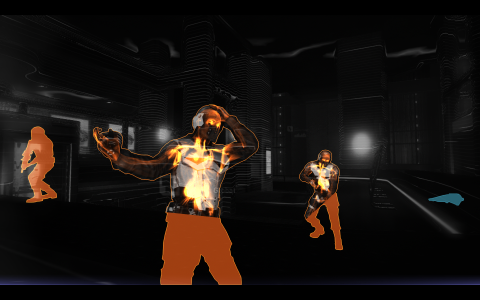 A recent trip into EA’s intellectual property vault results in Syndicate, a new first-person shooter that combines the craftsmanship and technical expertise of Swedish devhouse Starbreeze with the basic fiction (but little else) of the late, great Bullfrog’s classic 1993 isometric tactics game, Syndicate. Unless you’re hopelessly wed to the old games, you’ll find the new Syndicate a thoroughly solid, impressively rendered, just slightly undercooked take on the modern manshoot. EA could have done a lot worse.

Syndicate takes place in a nightmarish future 2069, an era defined by the domination of a few dozen massive corporations --those would be the syndicates-- which have displaced traditional governments. 57% of humans have expensive chips in their heads which let them participate in a malignant consumer culture based on compulsory unchecked consumption, while the 43% who are have-nots scramble for survival in the ruined ghettos underneath the megascrapers. Syndicate has a lot of fun with the social commentary, and it feels timely given recent real-world events. This hellish future proves a continually interesting backdrop for the bang-bang shoot-shoot.

The single-player campaign serves as a reasonably fun tour of this compellingly grim future, dropping you off in a succession of syndicate hotspots just long enough to feel ready for the next. The story is pretty thin, relying on lots of supplementary text to flesh itself out and ending in the typical cliffhanger that games seem so fond of nowadays. Even so, the ride itself is enjoyable because the action is solid and the locations are beautiful.

From the radiant neon night of the training mission to a massive, sun-drenched flotilla under the azure skies of the Atlantic Ocean, Syndicate’s production values are impeccable; Starbreeze really coaxed some beautiful sights out of aging hardware. Some might decry the admittedly excessive use of bloom effects, but we enjoy the busy, occasionally blinding, over-the-top motif. (And you never know, maybe by 2069 every other surface will in fact have a blindingly shiny chrome finish.) The only real problem with these pretty levels is that they often have you running through corridors and enclosed rooms. The flotilla level, for example, lets you glimpse a few vivid vistas worthy of Mirror’s Edge, but mostly sends you running through the ship’s innards.

You play a technologically modified agent, and a simple upgrade system lets you boost his abilities once in a while. More important is his ability to breach (hack) many electronic systems, including those in enemies’ heads. Breaching lets you activate environmental switches, disable enemy shields, and solve very simple puzzles. You can also run three offensive “applications” that stun your foes, make them kill themselves, or start fighting for you (a thankless job, as then they kill themselves anyway). Killing baddies recharges your programs, with rapid-fire killstreaks providing the fastest charge.