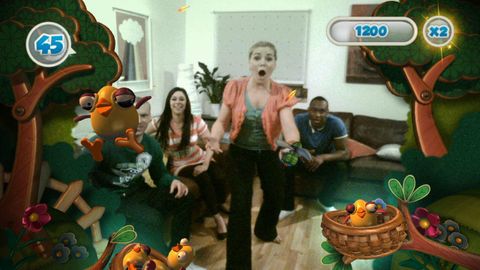 If that contrived set of Machiavellian circumstances applies, then you should innocently invite them to a party. And you should start that party with Start the Party. You won’t need to air aantagonistic word all night, but I guarantee you’ll never hear from them again.

Above: THIS IS NOT WHY YOU BOUGHT YOUR PLAYSTATION 3

Conceive of, if you will, not an actual mini-game collection, but rather a parody of mini-game collections. Emphasise all the vacuous, dull arm-waving and inconsequential goals, and cut out all of the frantic fun and potential for drunken giggles. You’ll have something similar to this game.

Above: A father and son bond by beating the crap out of the effigy of an animal. And thus a serial killer is born

The inherent blandness of the game’s interactions is tempered a little by its cool augmented reality tricks. Like many an Eyetoy game before it (and this really is little more than that), Start the Party displays the player and his or her surroundings on the screen, draped with various cartoon overlays.

The sweet part though, is the way in which it replaces the Move controller in your hand with a real-time 3D model of a prop appropriate to the current mini-game. Manipulating these things and observing their uncanny believability as they move through 3D space is far more interesting than it should be, and a brilliant tech demo for Move’s accuracy and all-round cleverness.

A shame then, that marvelling at the cartoon tennis racquet pretending to be in your hand is immensely more enthralling than anything you’ll actually do with it in the game.